Lara Bingle net worth: Lara Bingle is an Australian model who has a net worth of $6 million dollars. Born in Yowie Bay, New South Wales, Australia, Lara Bingle graduated from St. Vincent's College. She began modeling in the mid-2000s, and first came to national attention appearing in a popular Australian tourism ad campaign. Since then, she has appeared on the covers of multiple publications, including, Oyster, Woman's Day, OK!, Who, and Grazia. Like many Australian models, she also guest starred on the popular series, "Home and Away". She came in runner-up on the celebrity competition series, "Torvill and Dean Dancing on Ice", and she was the face of Vodaphone in 2008. In 2008, she also began modeling for Speedo. She signed with Elite Models in the US in 2011, and the same year, she competed on "Dancing with the Stars" in the US. She became the face of ROC Eyewear in 2011, and is also launching her own line of sunglasses. A reality show about her life, called, "Being Lara Bingle", began airing in June 2012. Lara Bingle has been married to actor Sam Worthington since 2014. 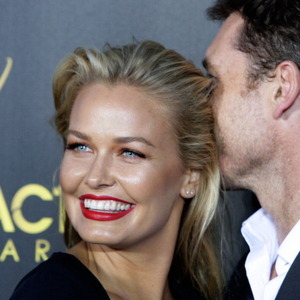