How much is La La Vazquez Worth?

La La Vazquez Net Worth: La La Vazquez is an American television news anchor who has a net worth of $9 million. Alani "La La" Anthony (born Vazquez) was born June 25, 1979 in Brooklyn, New York. Vazquez came into prominence as an MTV VJ on Total Request Live. While a student in high school, she got her first big break with her debut in a radio show, alongside Ludacris, called Future Flavas. Next she went to Washington, D.C., where she attended Howard University and studied Communications. While at Howard, she worked as a disc jockey at WHUR, the campus radio station. In 1999, she moved on to Los Angeles, California and went to work at KKBT radio where she was noticed by MTV and invited to audition, although was not called back until a year after the audition. She was the co-host of MTV's Direct Effect and Total Request Live. She also hosted the reunion specials for all seasons of VH1's Flavor of Love, both seasons of I Love New York, the first season of Real Chance of Love, the first season of Flavor of Love Girls: Charm School and For the Love of Ray J. In addition, she often introduced stories on MTV's High School Stories and appeared as a dean on VH1's Charm School with Ricki Lake. Vazquez made her film debut in 2001 in Two Can Play That Game. Her other film credits include Urban Massacre (2002), Monster Island (2004), You Got Served (2004), Think Like a Man (2012) and Think Like a Man Too (2014). On February 2, 2012, she launched MOTIVES by La La, at the Market America World Conference at the American Airlines Arena in Miami, Florida. Inspired to create a cosmetic line for women of color, ranging in color variation, her cosmetic line consists of multiple products for face, cheeks, eyes, lips and nails. 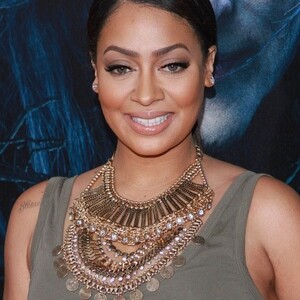