What is Kylie Jenner's Net Worth?

Kylie Jenner is an American model, reality television star and cosmetics entrepreneur. Kylie Jenner's net worth is $750 million. In a given year, Kylie earns around $40 – $100 million from her various endeavors.

The vast majority of her net worth comes from a cosmetics company called Kylie Cosmetics. In November 2019, Kylie sold 51% of her company to Coty Inc. for $600 million. Valuing the company as a whole at $1.2 billion. In the months following the deal, the value declined significantly. Kylie definitely earned around $340 million after taxes from the sale, but the value of her remaining 45% stake in the brand has gone down significantly.

Kylie Jenner was born on August 10, 1997 in Los Angeles, California. She is the youngest daughter produced by the marriage of businesswomen, Kris Jenner and the former Olympic athlete Bruce Jenner (who is known today as Caitlyn Jenner). Kylie's older sister is model Kendall Jenner and her half-siblings include Kim Kardashian, Kourtney and Khloe Kardashian and Brody Jenner. Kylie was just 10 years old when Keeping Up with the Kardashians debuted on E! on October 14, 2007. Today the KUWTK is the longest-running reality series in the US. For several over the early years of the show Kylie was a regular pre-teen who attended school and was a member of the cheer-leading team. In 2012 she left traditional school and began attending a home-school educational program. She earned a high school diploma in July 2015.

Is Kylie Jenner A Billionaire? – NO.


In November 18, 2019, Kylie Jenner was crowned a billionaire by Forbes. Forbes claimed she achieved billionaire status after selling 51% of her cosmetics company to  Coty Inc. for $600 million, valuing the company as a whole at $1.2 billion. Coty Inc. is a recently-struggling beauty business that owns brands like CoverGirl and MaxFactor. Kylie will remain the public face of the brand. Forbes claimed the deal valued her remaining 49% stake at $588 million on paper.

Coty, which also owns Clairol and OPI nail polish, has struggled in recent years with lagging revenue and executive turnover. The European-based company, which is controlled by an investment firm called JAB Ltd., has seen its stock price cut in half since 2016 when it acquired a dozen cosmetics brand from Procter & Gamble.

For the company to be worth $1.2 billion, she somehow convinced Coty Inc to pay a mind-boggling 27X multiple of profits.

After paying taxes on the $600 million portion of the sale, Kylie will likely be left with around $300 million. We can't say for sure just yet because it's not yet clear how $600 million has been structured. Was it all cash? Stock? A mixture of both? These questions have major implications on her tax treatment and ultimately net cash haul from the deal. Furthermore, Coty does not expect the deal to officially close until the third quarter of 2020.

On May 29, 2020 Forbes published a retraction article in which they admit that all the numbers they had reported previously were false. Literally made up by Kylie's accountants.

More info on this history below… 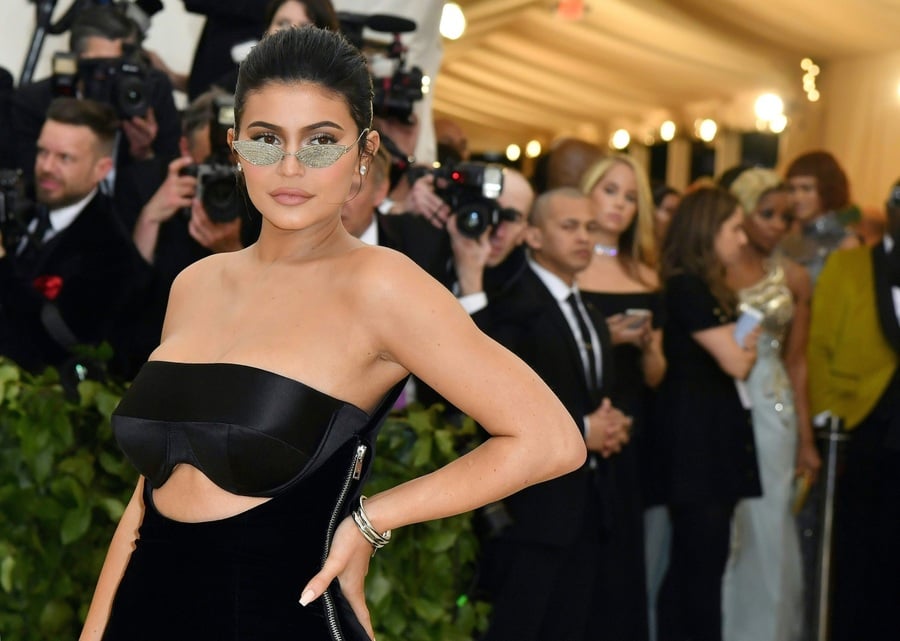 
We here at CelebrityNetWorth have been skeptical of proclamations of Kylie's wealth for years. Back in mid-2018 we estimated that her net worth was $150-$200 million. In July of that year Forbes published an article that claimed she was worth $900 million and on track to be the youngest self-made billionaire in the world all based on the reported revenue and growth of Kylie Cosmetics. We saw the same numbers and knew right away they were likely entirely made up. So on the same day Forbes went live with their article, we published the following:

That 2018 Forbes article claimed that Kylie's makeup company was worth $800 million. The article reported that in 2016, Kylie's company generated $307 million in revenue and in 2017 $330 million with $100 million in profit. The article also mentioned that Kylie Cosmetics' revenues had not been growing. In fact overall revenue grew just 7% in 2017 and was $70 million lower than had been predicted in mid-2017. Furthermore, her lip-kit revenue was actually down 35%, year over year.

In our opinion at the time, a much more reasonable multiple would have been 4x profits, which would have valued the company as a whole at $400 million. As the 100% owner she would have gotten around $260 million after taxes from a sale. Therefore we thought a much more reality-based net worth number for Kylie in July 2018 was $300-400 million.

Actually we wrong about everything above.

On May 29, 2020 Forbes was forced to write a retraction article titled:

In that article Forbes finally admits that all of their information was false. All of it. All of their headlines and magazine covers were based on lies and/or total misrepresentations. From the Forbes the May 2020 Forbes retraction:

"Then there were Kylie's financials. Revenues over a 12-month period preceding the deal: $177 million, according to the Coty presentation—far lower than the published estimates at the time. More problematic, Coty said that sales were up 40% from 2018, meaning the business only generated about $125 million that year, nowhere near the $360 million the Jenners had led Forbes to believe. Kylie's skin care line, which launched in May 2019, did $100 million in revenues in its first month and a half, Kylie's reps told us. The filings show the line was actually "on track" to finish the year with just $25 million in sales."

"Data from e-commerce firm Rakuten, which tracks a select number of receipts, suggests there was a 62% decline in Kylie's online sales between 2016 and 2018."

"The business was never that big to begin with, and the Jenners have lied about it every year since 2016—including having their accountant draft tax returns with false numbers—to help juice Forbes' estimates of Kylie's earnings and net worth. While we can't prove that those documents were fake (though it's likely), it's clear that Kylie's camp has been lying."

All this doesn't mean that Kylie didn't make A TON of money from her sale to Coty. Though Forbes also pointed out in their retraction that Kylie did not own a full 100% at the time of sale. It appears as though Kris Jenner owned at least 10%. Kylie sold half of her 90% stake at a $1.2 billion valuation. If the deal was all-cash, Kylie would have received roughly $340 million in post-tax cash from the deal while still owning a 45% paper stake in brand.

Unfortunately for Kylie and Coty, the sale has not exactly been kind to the parent company's stock price. In the six months following the deal, Coty's stock cratered 60%, at least somewhat on the news that it massively over-paid for Kylie Cosmetics and will likely have to write down the value of the brand. That will certainly reduce the paper value of Kylie's remaining 45%. Here's a chart of Coty stock between May 2019 and May 2020: 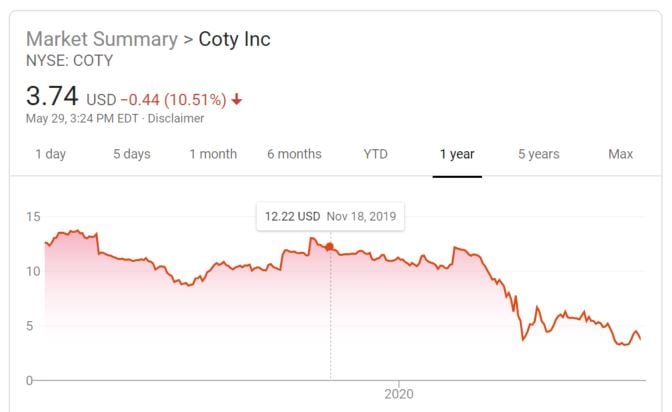 The company's total market cap today, according to investors, is $2.8 billion. That constitutes the total combined value of dozens of brands including Kylie Cosmetics, which as we noted, was probably never worth anywhere near $1.2 billion. It's more than likely that Coty will soon have to write-off a large percentage of the Kylie brand, rendering Jenner's remaining 45% stake valueless. 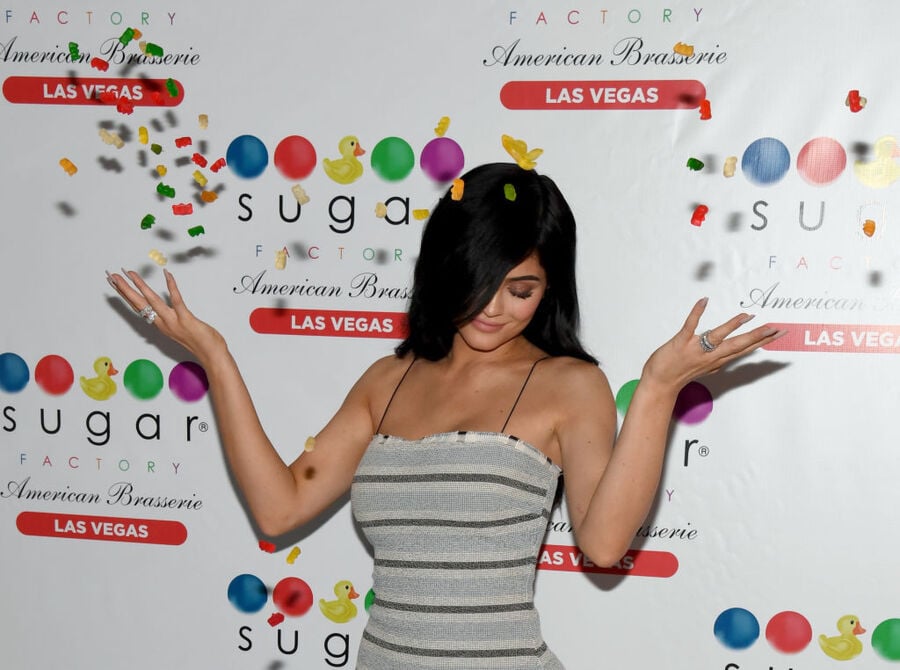 Kylie Jenner's modeling career took off with the Sears clothing line "Crush Your Style". She has also been featured in various photo shoots for publications like OK! Magazine and Teen Vogue. Kylie Jenner made her catwalk debut at New York's Fashion Week in September 2011. The family members were there, in front row, cheering on their little sister through the nerve-wracking moment. She may have been nervous, but this little diva didn't let it show, as she strutted down the catwalk, rocking a black ballerina-style dress by Abbey Dawn. Following her big sis Kendall's footsteps, Jenner landed modeling gigs for various companies including Australian swimwear designer White Sands. Jenner was featured in People magazine's beautiful people article with her big sister in 2010. Kylie and Kendall hosted red-carpet events for Glee: The 3D Concert Movie and The Twilight Saga: Breaking Dawn – Part 1 in Los Angeles. They also did an interview in the Bing Box at The Hunger Games premiere on March 12, 2012. In 2013 Kylie and Kendall both earned $100,000 to endorse a line of nail lacquers called Nicole by OPI. Kylie and Kendall also released a science fiction novel, Rebels: City of Indra which is about two girls with superpowers who embark on a journey. When Kylie and Kendall co-hosted the 2014 Much Music Video Awards, Kylie finally made her acting debut in a promo for the show. In 2014 Kylie launched a line of handbags for Steve Madden. In March 2015 she became the brand ambassador for skincare company Nip + Fab. In June 2015 Kylie and Kendall launched a clothing line with British fashion retailer Topshop. In 2016 Kylie was announced as the new face of PUMA. In 2017 Kylie launched a line of sunglasses with an Australian company called Quay Australia.

Kylie's enormous personal fortune comes thanks to her cosmetics empire. She created her first product, a line of lipstick, in August 2015. The "Kylie Lip Kit" was an instant success. She launched a personalized website and app in September 2015.

Her current primary residence is an eight-bedroom, 11-bathroom Cape Code style mansion in Hidden Hills, California which she bought in 2016 for $12 million. The 13,000 square-foot home has eight bedrooms and 11 bathrooms.

In February 2019 Kylie paid $3.25 million for an undeveloped plot of land in La Quinta, Ca, within the exclusive Madison Club gated community where several of her family members also own homes.

In May 2020 Kylie paid $15 million for a vacant lot in Hidden Hills, Ca. She proceeded to hire famed architect Richard Landry to plan an 18,000 square foot mansion.

It has been reported by a source close to Kris Jenner that Kyle spends $300,000 per month on clothes for herself and her daughter. She also reportedly spends $300-400,000 per MONTH on cars payments and security.

The property's we previously mentioned were acquired for a combined $80 million over various transactions. In California, her annual property tax bill is roughly 1% of purchase price. That means on an annual basis Kylie owes the state of California around $800,000 in property taxes, roughly $67k per month.

Kylie reportedly spent $72 million on a Global Express private jet. She has not been shy in using the jet, even for criminally short flights. In July 2022 Kylie earned the nickname "Climate Criminal" after it was revealed that she had used her private jet to fly from Van Nuys to Camarillo, California, a trip that could have taken a half hour by car and only took about 12 minutes by flight. Around the same time she was shamed as "classless" after posting on social media a photo with her boyfriend Travis Scott standing in front of two private jets with the caption "You wanna take mine or yours?".

Critics have been especially harsh considering Kylie's purported image as an eco-crusader.

Kylie first started dating rapper Travis Scott in 2017. They welcomed a daughter in February 2018. They started living apart in mid-2019. She had previously been in a relationship with rapper Tyga between 2014 and 2017.

Kylie Jenner's net worth is $750 million. 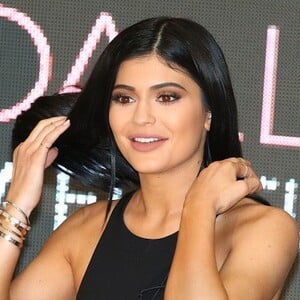