Kristina Shannon Net Worth: Kristina Shannon is an American model who has a net worth of $250 thousand dollars. Born in 1989 in Ann Arbor, Michigan, Kristina Shannon and her twin sister, Karissa, are Playboy Playmates. The girls began dating Hugh Hefner and moved into the Playboy Mansion in 2008. Soon, they started appearing on the E!

reality show "The Girls Next Door" to showcase their relationship with Hefner. The girls were chosen as centerfold models for the July and August issues of the magazine. Two years after moving in, they left the Playboy Mansion. Following their exit from Hefner's house, they appeared in the movie "Somewhere", which was highly honored at the 2010 Venice International Film Festival. Both twins also took part in the ninth season of "Celebrity Big Brother", which aired in the U.K. They later appeared on the spin-off series "Big Brother's Bit on the Side". In 2012, Kristina was rumored to be romancing Playboy Playmate Ida Ljungqvist, the first African-born woman to appear as a Playmate. The sisters have faced several run-ins with the law. Both were charged with aggravated battery stemming from an altercation at a house party. The Shannons pled no contest and were sentenced to restitution payments and probation. 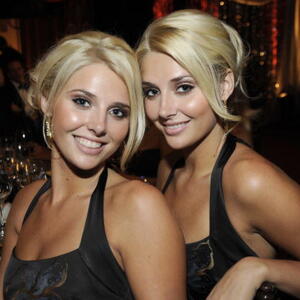