Kristanna Loken net worth: Kristanna Loken is an American actress and model who has a net worth of $8 million. Kristanna Loken was born in 1979 in Ghent, New York where she grew up on her parents' fruit farm with her sister Tanya. Her mother, a former model, encouraged young Kristanna to follow in her footsteps and she participated in the 1994 Elite Model Look, placing in the third runner up position in 1994. That same year, Loken started her acting career on the soap opera "As The World Turns" as Danielle "Dani" Andropolous. She is best known for her roles in "Terminator 3: Rise of the Machines", "BloodRayne", and "Painkiller Jane". She also appeared in 10 episodes of the fourth season of "The L Word" and in the fifth-season finale of "Burn Notice" as CIA Rebecca Lang, a role she reprised in three episodes during season six in 2012. She has appeared on a number of television series as a guest star including "New York Undercover", "Law & Order", "Aliens in the Family", "Unhappily Ever After", "Lois & Clark: The New Adventures of Superman", "Star Trek: Voyager", "Just Shoot Me", "Pacific Blue", and "Philly". She was married to actor Noah Danby from 2008 to 2009. 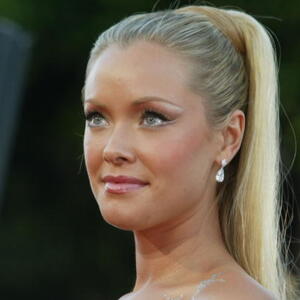