Kathy Lloyd is a Welsh glamour model and current television presenter who has a net worth of $8 million. Kathy Lloyd has earned her net worth as a former Page 3 girl which is a tabloid newspaper feature consisting of a large photograph of a topless female glamour models. Kathy was born on November 13, 1967 in Portmeirion, Gwynedd, Wales.

Kathy attended the attended Warwick Bolam High School in Netherton, Bootle, near Liverpool However he left at the young age of 16 to work at the Top Shop clothing store in Liverpool. Later in 1984 she left Liverpool to pursue her modeling career. A famous UK glamour photographer who persuaded her to send some photos to The Sun after her took some early photos of her. In 1986 at the age of seventeen she made her debut as a page Three girl in The Sun. Lloyd who was named in the FHM 100 Sexiest Women in the World 2005, has also appeared in magazines such as; Maxim, Loaded, and FHM; and hosted two television talk shows for Granada Television's Men & Motors satellite station in 2002, Talking Dirty, and Kathy Lloyd's Naughty Business. 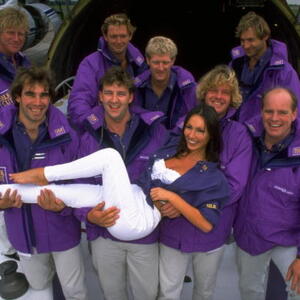