What is Karina Smirnoff's Net Worth?

Karina Smirnoff is a Ukrainian professional ballroom dancer who has a net worth of $6 million. Karina Smirnoff is best known for being a regular competitor on the dance competition television series "Dancing with the Stars." Over the show's run, she won the 13th season with actor J. R. Martinez, and was runner-up in seasons 3 and 17. Beyond "Dancing with the Stars," Smirnoff has won multiple championships at the US Open, Asian Open, and Dutch Open, among other events.

She embarked on her professional dancing career in the United States, soon after she joined a dance school in Brooklyn, New York. Together with her dancing partner Slavik Kryklyvyy, she enjoyed tremendous success, winning several US Championships and fetching other world titles, while being named world's second in the Latin division. Other ballroom titles she has earned include: five-time U.S. National Champion, World Trophy Champion and Asian Open Champion, among others.

As a multi-season, non-celebrity participant in ABC's prime-time show, she has numerous partners like actor Mario Lopez (with whom she took the second place in the 3rd season and then she dated him), country singer Billy Ray Cyrus, boxer Floyd Mayweather, famed chef Rocco DiSpirito and Steve Wozniak. It was the thirteenth season of the show, when Karina and army veteran & soap opera star J. R. Martinez turned out to be winners. In addition to fetching gold, she has won runner-up title, a semi-final title, and several quarter final titles.

Karina Smirnoff was born on January 2, 1978 in Kharkiv in what was then Soviet Ukraine. She is of Russian and Greek ancestry, and is an only child. Smirnoff got into ballroom dancing fairly early on, starting to compete at the age of 11. In 1993, she immigrated to the US. There, Smirnoff went to a number of different schools, from Nerinx Hall High School in St. Louis, Missouri to Christopher Columbus High School in the Bronx borough of New York City. Ultimately, she completed her secondary education at the Bronx High School of Science. Smirnoff went on to attend Fordham University, from which she graduated with degrees in economics and information systems programming.

Starting off her dance career, Smirnoff had a notable partnership with Roman Nabatov. The pair competed as an amateur couple before ending their partnership in early 1997. The following year, Smirnoff began dancing with British ballroom dancer Paul Killick; they eventually broke off their partnership in the summer of 1999. Immediately after this, Smirnoff started dancing with Dutch-American dancer Louis Van Amstel. Following their split in late 2000, Smirnoff had her most successful dance partnership yet with Slavik Kryklyvyy, with whom she danced from 2001 to 2005.

After her partnership with Kryklyvyy ended in 2005, Smirnoff danced with Dmitri Timokhin. Together, the pair won first place at the Grand-Prix Dynamo in Moscow in 2006.

Smirnoff has won numerous dance championships during her career. Among them, she has won multiple US Open, Asian Open, Dutch Open, and US National Professional titles. Smirnoff also won the UK Open, and came in second at the British Open Blackpool Dance Festival. Significantly, she is the first woman to have reached the British Professional Final with three different partners. 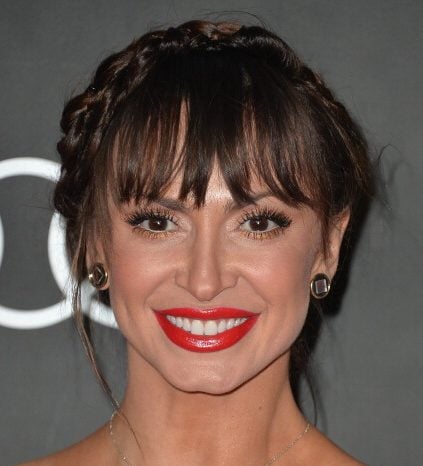 Dancing with the Stars

In 2006, Smirnoff joined the ABC dance competition television program "Dancing with the Stars" for its third season. Paired with celebrity partner Mario López, she finished the season in second place behind Cheryl Burke and Emmitt Smith. Smirnoff returned for season four in 2007, and was paired with singer and actor Billy Ray Cyrus; they ultimately finished in fifth. Paired with champion boxer Floyd Mayweather, Jr. for season five, she finished in ninth. For season six, Smirnoff and her partner Mario came in fifth. She subsequently partnered with chef Rocco DiSpirito in season seven, finishing in ninth. With Apple co-founder Steve Wozniak, Smirnoff came in 10th in season eight. She fared better the next season, placing fifth with singer Aaron Carter. After skipping a season, Smirnoff returned for season 11 as the partner of reality television star Mike Sorrentino; they finished in ninth. Her partner in season 12 was actor Ralph Macchio, with whom she made fourth place.

Smirnoff had her first win on "Dancing with the Stars" in the 13th season in 2011. Paired with "All My Children" actor J. R. Martinez, she beat out the pairs of Rob Kardashian and Cheryl Burke, and Derek Hough and Ricki Lake, to claim the title. The next season, Smirnoff only came in ninth place with her partner Gavin DeGraw. She subsequently came in fifth in season 15 with partner Apolo Anton Ohno. A better result came in season 16, when Smirnoff and football player Jacoby Jones finished in third. The following season was even more successful, with Smirnoff and actor Corbin Bleu finishing in the runner-up position. Smirnoff performed less well over the subsequent seasons, coming in 11th in both seasons 18 and 19 with Sean Avery and Randy Couture, respectively. After sitting out season 20, she had her worst result yet in season 21, finishing 12th with Victor Espinoza. For season 22, Smirnoff partnered with former football player Doug Flutie and came in ninth.

Smirnoff has made a number of appearances in popular media outside of "Dancing with the Stars." In 2004, she played a dance instructor in the romantic dramedy "Shall We Dance?," a remake of the eponymous Japanese film. A few years after that, she guest-starred in an episode of the teen television sitcom "Hannah Montana." Later, in 2016, Smirnoff was part of the cast of the second season of the E! reality television series "Famously Single." She appeared alongside Tiffany Pollard, Malika Haqq, Chad Johnson, Calum Best, Dorothy Wang, and Ronnie Ortiz-Magro, among other personalities.

In 2009, Smirnoff got engaged to fellow "Dancing with the Stars" dancer Maksim Chmerkovskiy. The pair ultimately broke off the engagement after nine months. Smirnoff subsequently started dating MLB pitcher Brad Penny, to whom she got engaged in late 2010. The couple broke off their engagement a little over a year later in December of 2011. In early 2015, Smirnoff got engaged to entrepreneur Jason Adelman; they too broke off their engagement, this time within a few months. Smirnoff later began a relationship with Justinas Duknauskas, with whom she had a son named Theo Gabriel in 2020. 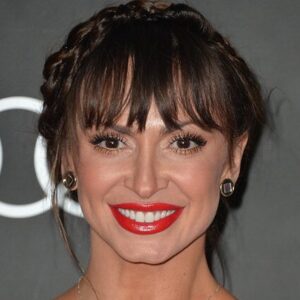