Karima Adebibe net worth: Karima Adebibe is an English actress and model who has a net worth of $2 million dollars. Born in London, England, Karima Adebibe was working as a secretary when she was invited to become the model for Lara Croft, in the Lara Croft Tomb Raider video game series in 2006.

She was the seventh model for the game, after such performers as Rhona Mitra, Nell McAndrew, and Lucy Clarkson. After undergoing rigorous training that included martial arts, archery, and speech, she spent the next two years touring and promoting the game in character. Since retiring in 2008, she has appeared in the films, "Frontier Blues" and "Sherlock Holmes: Game of Shadows". She also had a small role in "AVP: Alien vs. Predator" in 2004. Zoo Magazine chose her for their "Hot List" in 2006. She is of Greek Cypriot, Irish, and Moroccan heritage and now works primarily as a model. 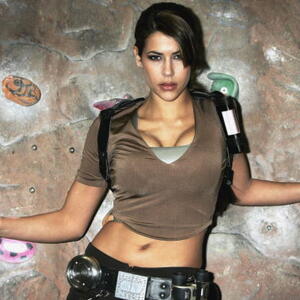