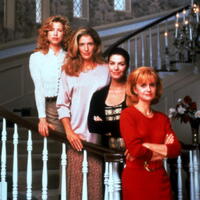 Julianne Phillips net worth: Julianne Phillips is an American model and actress who has a net worth of $30 million dollars. Julianne Phillips was born in Chicago, Illinois, and grew up in Lake Oswego, Oregon. She went on to graduate from Brooks College, and then relocated to New York to launch a modeling career. She began modeling professionally in the early 80s, and signed with Elite Model Management. She became one of their most successful models in the 80s, earning as much as $2000 per day. Her modeling work led to acting offers, and she went on to appear in such projects as "Summer Fantasy", "Odd Jobs", "Sweet Lies", "Skin Deep", "Fletch Lives", "Midnight Caller", "The Larry Sanders Show", "A Vow to Kill", "Big Bully", and "Allie & Me", among other projects. She is most widely recognized for her co-starring role on the television series, "Sisters", and for her marriage to, and subsequent divorce from, Bruce Springsteen.

Julianne Phillips Divorce Settlement:
Even though their marriage lasted just four years, this happened to be one of the most lucrative periods in his career. After being married from 1985 to 1989, Bruce Springsteen paid Julianne a $20 million divorce settlement. It is considered on the the most expensive celebrity divorce settlements of all time.