Jordan Carver Net Worth: Jordan Carver is a German glamour model and actress who has a net worth of $2 million dollars. Ina-Maria Schnitzer (aka Jordan Carver) was born January 30, 1986 in Trier, Rhineland-Palatinate, Germany. She is best known for her disproportionately large breasts (in comparison to her otherwise slim figure).

She entered the modeling world behind the scenes as a beautician and make-up artist, first with a large French company and later on her own. Jordan's multi-faceted website was created early in 2010 and served to increase her popularity and global intrigue. When she realized that the majority of her fan base was in the U.S., she relocated to The States, where she secured her first major modeling job for Haute Shop LA and signed her first significant contract. After booking her first appearance on U.S. television, on WGN Morning News, she began scoring more TV appearances and photo shoots for various magazines and online venues. At the end of 2010, Jordan won the contest for the racing sport seat production company COBRA and became their spokes model-a position she held until recently. She later won second place on the Top 100 Internet Model Newcomer of the Year list after being nominated by Break Media. Her exposure increased when she launched a Facebook page in 2011. On the subject of 'exposure', as Carver left the African reality show Wild Girl-In High Heels Through Africa, Bild magazine published a piece that exposed her real name, fake age, secret wedding to her manager David Sebastian, pictures of her before breast augmentation and her intentions to keep certain details of her life secret and hidden. 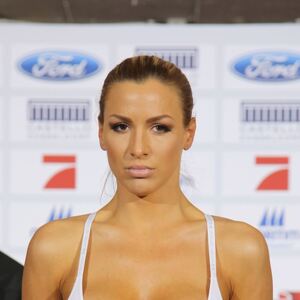