Joanna Angel net worth: Joanna Angel is an American film and adult actress, director, and writer who has a net worth of $2 million. Joanna Angel was born in Brooklyn, New York in December 1980. She started the production company Burning Angel in 2002 which helped the alt-adult scene grow with alternative performers in hardcore scenes.

Angel has more than 100 acting credits to her name as well as another 100 directing credits.  She was named one of the 12 most popular stars in adult film by CNBC in 2012. Angel was inducted into both the AVN Hall of Fame and the XRCO Hall of Fame in 2016. She has also won multiple AVN Awards for Best Porn Star Website for JoannaAngel.com. She dated fellow adult star James Deen for six years and later described the time as "violent and scary". Angel has appeared in episodes of the TV series The Owl in Echo Park and Racquetball and in the documentary film Doc of the Dead. 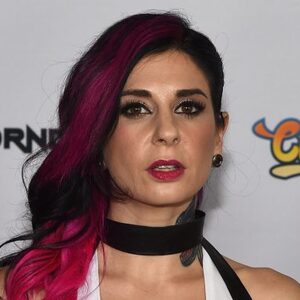