Joan Smalls Net Worth and salary: Joan Smalls is a Puerto Rican-born, American fashion model who has a net worth of $26 million. She was born Joan Smalls Rodriguez on July 11, 1988, in Hatillo, Puerto Rico. Today Smalls is one of the most successful and highest-paid models in the world. She first entered the world of fashion in 2007 when she left her homeland and moved in with her aunt in Queens. She soon signed with Elite Model Management. With designer Riccardo Tisci's help, she appeared in Ricky Martin's "It's Alright" music video while still in her first year in the business. Shortly after, she became a true force on the runway. It was in 2010 when she was chosen to walk exclusively for the Givenchy Spring 2010 couture show, a professional engagement that immediately turned her into one of the most coveted runway models. Since then, Smalls has walked for lead designers like Oscar de la Renta, Sophie Theallet, Brian Reyes, Catherine Malandrino, Jean Paul Gaultier, Stella McCartney, Prada, Marc Jacobs and Alexander Wang among others. Her presence in the campaigns for Gucci and Givenchy, and her appearances in Vogue and Vogue Paris that catapulted Joan into worldwide stardom. Apart from having her major closing moments on the Spring 2011 Jean Paul Gaultier and Dior runway, opening moment at Yves Saint Laurent and cover of the Fall 2010 issue of i-D; Joan was one of the few models to earn a shout out from Kanye West in his song, Christian Dior Denim Flow, along with Kate Moss, Coco Rocha, Alessandra Ambrosio and Anja Rubik. A devoted daughter, Joan Small spent her first hard earned model dollars buying a car for her father. In 2018 alone, Joan earned $8.5 million. That was enough to make her one of the 10 highest-paid models on the planet. 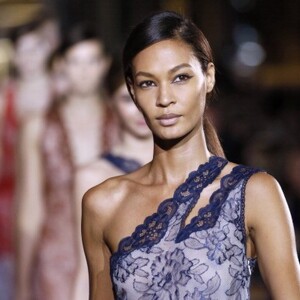