Joan Severance net worth: Joan Severance is an American actress and model who has a net worth of $6 million. She was born in Houston, Texas in 1958 and at the age of 18 started modeling for international magazines and top designers. She worked on campaigns for Chanel and Versace, as well as commercial products like Windsong perfume, Breck shampoo, Clairol, English Leather, L'oreal, Revlon, and Maybeline.

After a very high profile editorial career, she left the modeling world and tried her luck with acting. She landed her first major television role in 1987 for a CBS show called Wiseguy starting Ken Wahl and Kevin Spacey. Soon after, she was appearing in films like See No Evil, Hear No Evil, Bird on a Wire, No Holds Barred, and Lake Consequence. More recently she has made appearances in popular television shows like One Tree Hill, CSI: Miami, and a Hallmark film called, Mystery Woman. In 2013, she also appeared in American Horror Story: Asylum. In addition to her career in the entertainment industry, she also has a Bachelor's Degree in Natural Health and has created a game and computer application centered around alternative and holistic lifestyle choices. She enjoys interior, landscape, and fashion design, as well as cooking, writing, and anything to do with horses. She was married to fellow model, Eric Milan, from 1977-1984, and most recently been linked to Robin Leach. The pair appeared on an episode of Celebrity Wife Swap in April 2014, but call themselves good friends and are not married. 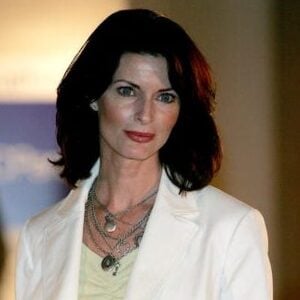