Jessica Stam net worth: Jessica Stam is a Canadian model who has a net worth of $3 million. Jessica Stam was born in Kincardine, Ontario, Canada in April 1986. Stam is considered to be one the models who has what is described as a "doll face". She was named #15 on Forbes' World's 15 Top-Earning Supermodels in 2007 when she earned $1.5 million the previous 12 months.

She was discovered in a coffee shop and won the Los Angeles Model Look contest in 2012. She has been on the cover of Vogue magazine in the UK, Turkey, and Germany. Stam has also starred in advertisements for Giorgio Armani, Dolce & Gabbana, and Marc Jacobs. She has appeared in Fashion Weeks in New York, Paris, and Milan. Stam has also been featured in the Victoria Secret's Fashion Show. She was named as an "Industry Icon" by models.com and has hosted for Yahoo!'s fashion show The Thread. She has dated professional hockey player Aaron Voros as well as Anthony Kiedis of the Red Hot Chili Peppers and DJ AM. 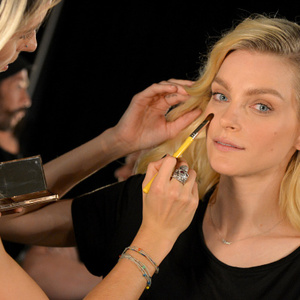