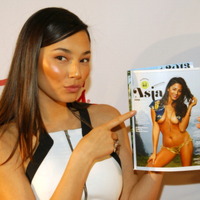 Jessica Gomes net worth: Jessica Gomes is an Australian model who has a net worth of $6 million. Born in September of 1985, Jessica Gomes is a professional model who has appeared in a number of American and international publications. Some of her most notable appearances include Sports Illustrated's Swimsuit Issue, in which she has appeared since 2008. Gomes also works regularly in Australia, her native country, Asia, and has a large following within the East Coast "hip hop community." This likely stems from her appearance as the voice in Rick Ross's music label, Maybach Music Group. Here she lends her voice to the beginning of each track. She has also worked as the spokeswoman for both LG Electronics and Hyundai – both of which are based out of Korea. In fact, her appearance with LG's ads is often considered to be her breakout role in the modeling industry. Born of Portuguese and Chinese decent, Gomes was born and raised in Australia, where she often continues to work. In 2005, she moved to New York City, where she lived with Gemma Ward, to continue her modeling career, before moving to Los Angeles. As a child, Gomes appeared in various TV shows as an extra, which she considers to be her start into the modeling industry.