Jenny Shimizu Net Worth: Jenny Shimizu is a Japanese-American actress and model who has a net worth of $2 million. Born in San Jose, California, in 1967, Jenny Shimizu grew up in Santa Maria. She first started working as a mechanic. It was while she was working on cars that she was discovered by a modeling scout.

Shimizu modeled with Calvin Klein and Banana Republic. The five-foot, seven-inch model appeared on "America's Next Top Model" in 2009 with Tyra Banks. She served a judge on the second season of "Make Me A Supermodel" on Bravo. Shimizu's other screen appearances include "Itty Bitty Titty Committee", "Dante's Cove", and "Foxfire" with Hollywood star Angelina Jolie. Shimizu has made headlines for her romantic relationships. In 2007, she claimed she had been sexually involved with Madonna, and that the pop star would fly her around the world at any time so the pair could be intimate. Shimizu also dated her Angelina Jolie after they met on the set of "Foxfire"; Jolie has said she would've married Shimizu if she hadn't been wed to her husband. She married Rebecca Loos, a model who rose to fame after claiming an affair with football star David Beckham, on the set of the "Power Lesbian UK" documentary to protest the U.S. legal position on same-sex marriage in 2005. During the summer of 2014, Shimizu married her wife, Michelle Harper, whom she'd been dating for two years. 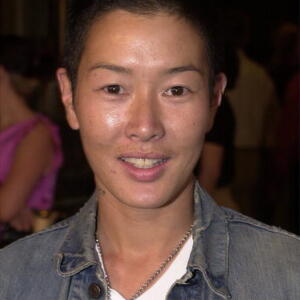