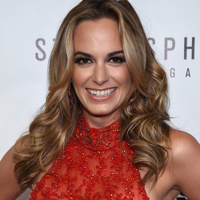 Jena Sims net worth: Jena Sims is an American model and actress who has a net worth of $2 million. Jena Sims was born on December 30, 1988 in Winder, Georgia. She attended Winder-Barrow High School and then briefly attended Belmont University in Nashville. She left college to pursue a career in Hollywood as an actress and model. She modeled before college, winning Miss Georgia National Teenager and Miss Junior National Teenager (2005). In 2007 she was crowned Miss Georgia Teen USA. As an actress she appeared in the 2012 movie "Attack of the 50 Foot Cheerleader", the 2013 movie "Last Vegas" and the 2015 movie "3-Headed Shark Attack. Outside of acting, Jena Sims runs a non-profit charity organization that puts on beauty pageants for kids with cancer. She received several honors for her charity work with children. Jena is 5 foot 8 inches tall and has brown hair and brown eyes.