Jasmine Sanders net worth: Jasmine Sanders is a German American model and fashion influencer who has a net worth of $3 million. She is best known for being on the cover of the 2020 Sports Illustrated Swimsuit Issue.

Jasmine Sanders was born in Frankenthal, Germany in June 1991. She has been represented by The Society Management, Elite Model Management, and Storm Model Management. As a teenager she modeled for Seventeen, Nike, ALDO shoes, Free People, and more. Sanders has appeared in many runway shows for Ralph Lauren, Moschino, DKNY, and more. She appeared in the 2019 Sports Illustrated Swimsuit Issue before being featured on the cover of the 2020 issue. Sanders was a guest judge on the reality TV series America's Next Top Model in 2017. She has also appeared on episodes of the TV series Extra, Hip Hop Squares, Lindsay Lohan's Beach Club, Scream, and Catfish: The TV Show. In 2014 she appeared in the movie School Dance. 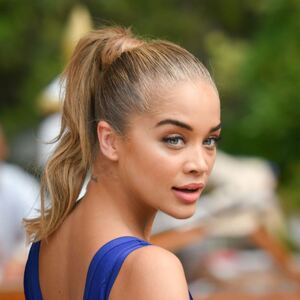