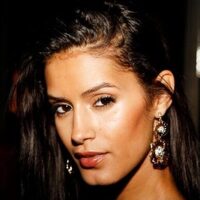 Jaslene Gonzalez Net Worth: Jaslene Gonzalez is a Puerto Rican-American model and television host who has a net worth of $1 million. She is best known as the winner of Cycle 8 of America's Next Top Model.

Jaslene Gonzalez was born May 29, 1986 in Puerto Rico, United States, with Territories. Gonzalez grew up in Humboldt Park, Chicago and attended Notre Dame High School for Girls on the northwest side of Chicago. She had done some modeling prior to America's Next Top Model, having been represented by Avant Garde Models. In her CW 'Close-up' interview, it was revealed that she had also appeared in fashion shows for local Chicago designers, including Michelle Gomez of Chicago and Alexis Arquette. In her Seventeen magazine interview, she said she had been in an abusive relationship with her ex-boyfriend; the relationship ended shortly before the filming of Cycle 7, which she had tried out for but only made it to the semifinals. Her modeling career has been extensive. She has modeled for the New York Post (Tempo), US Weekly, In Touch Weekly, had a 6-page spread in an issue of Vibe Vixen magazine and a 12-page fashion spread for ZooZoom Magazine.

Named One Of Latina Magazine's Latinas Of the Year, she also had a 9-page spread for Colures (U.K fashion Magazine), was featured in Trace (magazine): Model Behaviour as Falls new faces, has been on the covers and had spreads of over a dozen magazines such as Latina, Imagén, Hombre, 6 Degrees, FN, ZooZoom, Fashion Salon Seventeen, Urban Latino, Bleu, Vanidades, Scene, JamRock, Splendor, Time Out and Metrostyle Catalog, among many others. She has also done extensive runway modeling. As part of her America's Next Top Model prize, Gonzalez won representation by Elite Model Management, a $100,000 contract with CoverGirl cosmetics and a photo shoot for the cover of a 6-page spread in Seventeen magazine. Jaslene Gonzales also made appearances on talk shows, including Live With Regis and Kelly, 106 & Park, TRL and The View—modeling a dress designed by Elisabeth Hasselbeck.