Isabeli Fontana net worth: Isabeli Fontana is a Brazilian model who has a net worth of $8 million. Born in Curitiba, Brazil, Fontana has been modeling since she was a teenager. She was a final contestant of the Elite Model Look event held annually by an international model management group when she was 13.

A year later, Fontana moved to Milan to pursue her career. She generated controversy with her appearance in a Victoria's Secret lingerie catalogue when she was 16, but the divisive photo shoot landed Fontana contracts with several famous companies, including Versace and Valentino. Fontana has modeled for dozens of brands such as Ralph Lauren, Revlon, Saks Fifth Avenue, Hugo Boss, Dolce and Gabbana, and Chanel. She has also been featured in the pages of a variety of magazines, including "Marie Claire", "Vogue", "Harper's Bazaar" and the "Sports Illustrated Swimsuit Issue". She was part of the 2008 list of the World's Top 15-Earning Models put together by "Forbes". Fontana's first marriage to actor Henri Castelli ended in 2007, a year after the birth of their son, Lucas. Her engagement to former football player Rohan Marley ended in 2012. 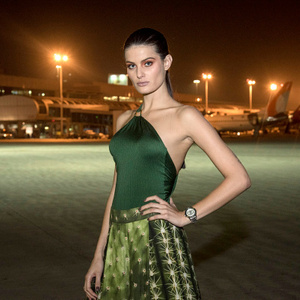