What is Iman's net worth?

Iman Abdulmajid Jones is a Somalian-American retired fashion model, actress and entrepreneur who has a net worth of $200 million dollars. She is professionally known as Iman (meaning 'faith' in Arabic). She is also credited with being a pioneer in the field of ethnic cosmetics. The widow of the late English rock star David Bowie, she is known for her fashion work with such renowned designers as Calvin Klein, Yves Saint Laurent, and Gianni Versace. Iman has also performed in film and television, and is involved in a number of philanthropic causes.

At the time of his death, David Bowie's net worth was $230 million. Iman came out best in the will, receiving their large dual-penthouse "apartment" in SoHo, as well as half of the rest of his estate. David's son Duncan received 25% of his father's estate. The other 25% (plus a mountain retreat in New York State) went to a trust for David's underage daughter Alexandria Zahra Jones. Corinne Schwab, Bowie's beloved longtime personal assistant, also known as Coco, got $2 million plus Bowie's former holdings in Opossum Inc. Even Bowie's childhood nanny Marion Skene got a piece of the action, worth a cool million dollars.

In January 2022, David's estate sold the rights to his publishing catalog for $250 million. Iman's pre-tax stake resulted in a roughly $125 million windfall.

Iman was born as Zara Mohamed Abdulmajid in 1955 in Mogadishu, Somalia. Her parents, diplomat Mohamed and gynecologist Miriam, renamed her Iman at the urging of her grandfather. She has four siblings: brothers Feisal and Elias, and sisters Nadia and Idil. Iman spent most of her childhood and adolescence at a boarding school in Egypt, where she was sent when she was four. She and her family eventually moved back to Somalia, and then to Kenya. In the latter country, Iman did a brief academic stint at the University of Nairobi, where she studies political science.

While in college, Iman was discovered by American photographer Peter Beard, causing her to immigrate to the United States to start a career in modeling. Following her first professional assignment with Vogue in 1976, she appeared on the covers of numerous prestigious magazines, and became the muse of many top designers. Taking the fashion world by storm, she was noted for her fine features, lithe figure, long neck, and copper skin. Throughout her career, Iman has worked with such high-profile photographers as Irving Penn, Annie Leibovitz, and Helmut Newton.

Following nearly two decades of modeling, Iman launched her eponymous cosmetics company in 1994. The popular, $25 million-a-year brand focuses on shades that are hard to find for non-Caucasian women, and is based on Iman's own self-mixed makeup formulations. In 2012, after years of being the commercial face of the line, Iman signed Somali designers Ayaan and Idyl Mohallim to be brand ambassadors.

Thanks to her success and visibility, Iman was approached by the CEO of the Home Shopping Network in 2007, and was encouraged to create her own clothing line. Global Chic, Iman's first collection, featured one-size-fits-all embroidered caftans, and was inspired by both her modeling career and her childhood in Egypt. The collection has since evolved into a line of affordable accessories, and as of 2020, is among the bestselling fashion and jewelry brands on the Home Shopping Network. 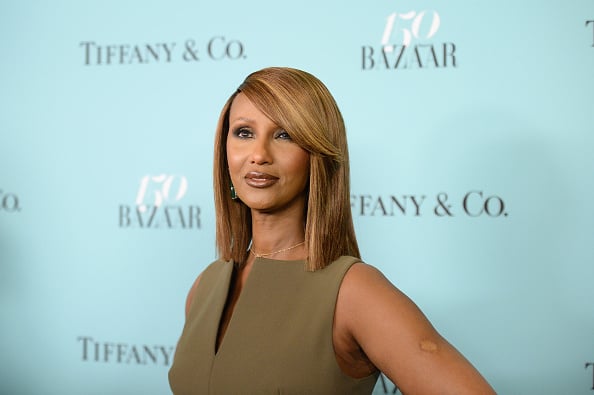 In 1979, Iman made her film acting debut in Otto Preminger's British thriller "The Human Factor," in which she played the wife of an MI6 bureaucrat. In the 1980s, she had parts of varying sizes in films such as "Out of Africa," "No Way Out," and the Michael Caine comedy "Surrender." Upon coming to Hollywood in 1991, Iman was cast as a shapeshifting alien in "Star Trek VI: The Undiscovered Country," and appeared alongside her then-fiancé David Bowie in the crime comedy "The Linguini Incident." Other film appearances that year included roles in "Lies of the Twins," "L.A. Story," and "House Party 2."

On TV in the 1980s, Iman was featured in two episodes of "Miami Vice," and had a guest role on "The Cosby Show." Later, in the 2000s, she hosted Bravo's "Project Runway Canada" for two years. In 2010, she hosted the second season of "The Fashion Show" alongside her colleague Isaac Mizrahi.

At eighteen, Iman married Hassan, a Hilton hotelier executive and Somali entrepreneur. They were divorced two years later when Iman moved to the United States. In 1977, Iman dated actor Warren Beatty, and later that same year became engaged to basketball player Spencer Haywood. The two got married and had daughter Zulekha in 1978, before divorcing in 1987. In 1992, Iman wed David Bowie at a private ceremony in Switzerland. The couple had a daughter, Alexandria, who was born in 2000. Additionally, Iman is the stepmother of Duncan Jones, Bowie's son from a prior marriage. As of 2021, she primarily resides in London and New York City. Iman is Muslim, and is fluent in Somali, Arabic, French, English, and Italian.

Iman actively participates in numerous charitable causes. Since 2019, she has been the first-ever Global Advocate for CARE, an international humanitarian relief agency. With the organization, she works to help eradicate global poverty and ensure all people can live with safety and dignity. Iman also works with the Children's Defense Fund, the Keep a Child Alive program, and Save the Children, for which she advocates in the greater region of East Africa. Further, she is involved with the Enough Project, a nonprofit that strives to end crimes against humanity. Working with the organization to end the trade of conflict minerals, Iman played a critical role in the campaign against blood diamonds. This cause led to her terminating her contract with diamond conglomerate De Beers Group.

Among her many laurels, Iman was bestowed with a "Fashion Icon" lifetime achievement award in 2010. Granted by the Council of Fashion Designers of America, the special award is devoted to "an individual whose signature style has had a profound influence on fashion." Iman accepted the prize from her friend Isabella Rossellini while wearing a gown designed by Giambattista Valli. Later, in recognition of her humanitarian work, Iman was honored at New York's 2019 Golden Heart Awards, winning the Michael Kors Award for Outstanding Community Service.