How much is Hilary Rhoda Worth?

Hilary Rhoda Net Worth: Hilary Rhoda is an American model who has a net worth of $11 million. Born on April 6, 1987, in Chevy Chase, Maryland, Rhoda is probably best known for her work with the brand Estée Lauder, as well as for her appearances in the Sports Illustrated Swimsuit Issue. Prior to establishing herself as a model, she attended and graduated from the Academy of the Holy Cross, a Catholic all-girls school in Maryland. Rhoda was initially discovered at a ProScout event in Washington, D.C., after which she was getting numerous call backs and eventually chose to be represented by Women Model Management. Soon enough, she started to star in one advertisement after another, for numerous brands like Hollister, Abercrombie, Valentino, Belstaff, Dolce & Gabbana, Givenchy, Donna Karan, Gucci, Shiatzy Chen, Blumarine, and Ralph Lauren, as well as in Victoria's Secret catalogs. Switching several modeling agencies, in Rhoda's resume can be found Click Model Management, IMG Models, as well as her current representative, Elite Model Management in New York. It was in January 2007 that Rhoda signed an exclusive contract with Estée Lauder as their newest face. By July, she already joined the group of top-earning super models and she was even named one of the top supermodels of 2007 by Vogue. The American beauty became the face of St. John Knits (as Angelina Jolie's replacement), ERES Beachwear, and the Neiman Marcus spring/summer 2009 campaigns. 2009 was also the year of Rhoda's debut in Sports Illustrated Swimsuit Edition, reprising her appearance in the men's mag in 2010 and 2011. While 2012 marks her emergence in Victoria Secret's Fashion Show. Because of her thick, dark expressive eyebrows, pale blue eyes and slightly large chin, Hilary Rhoda is often said to resemble to a young Brooke Shields. 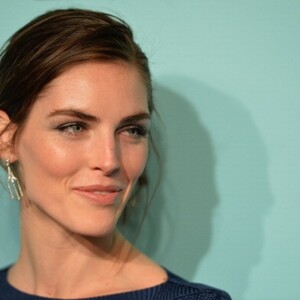