How much is Grace Jones Worth?

Grace Jones Net Worth: Grace Jones is a Jamaican model, actress, and musician who has a net worth of $7 million dollars. Grace Jones is known for her bold, androgynous look and progressive musical sound. She was a major influence on the cross-dressing culture of the 1980s, and has inspired numerous artists ranging from Annie Lennox to Lady Gaga. After becoming a staple of New York's disco scene in the late 1970s, she continued to flourish with a singing career that drew from genres including reggae, R&B, gospel, and art pop.

Early Life and Modeling: Grace Beverly Jones was born in 1948 in Spanish Town, Jamaica to Marjorie and Robert W. Jones. She was the third of an eventual seven siblings. Later, her parents moved to the American East Coast, leaving Jones and her siblings in the care of their maternal grandmother and her new husband, Pert. A violent disciplinarian, Pert's regular abuse of the children left a lingering impact on Jones' life. Eventually, Marjorie and Robert brought their kids to live with them in Salina, New York, a town near Syracuse where Robert founded his own Apostolic ministry. While enrolled at Onondaga Community College, Jones began rebelling against her parents by drinking, wearing makeup, and going to gay clubs. This was followed by a sojourn in Philadelphia where she lived in hippie communes while immersing herself in the counterculture. At eighteen, Jones moved back to New York and signed with the Wilhelmina modeling agency. Two years later, she was off to Paris, where she made her name working for renowned fashion houses such as Kenzo and Yves St. Laurent. She also appeared on the covers of Vogue and Elle, and worked with high-profile photographers including Helmut Newton and Guy Bourdin.

Transition to Music: In the 1970s, Jones transitioned to a career in music when she was signed by Island Records. Partnering with disco record producer Tom Moulton, Jones released her debut album, "Portfolio," in 1977. One of the standouts of the album, which included covers of famous tunes and three new recordings, was a seven-minute reinterpretation of the classic Édith Piaf song "La Vie en Rose"; it became Jones' first big hit. Following "Portfolio," Jones made her final disco albums with "Fame" and "Muse." She then moved on to new wave music during the next decade, starting with 1980's hit release "Warm Leatherette," featuring the contributions of Jamaican rhythm section duo Sly and Robbie. Next up was "Nightclubbing" in 1981; the studio album, widely recognized as Jones' best, became her highest-ranking record on the US Billboard mainstream albums and R&B charts. Subsequent albums included "Living My Life," which was recored in the Bahamas, and 1985's "Slave to the Rhythm," the last of Jones' records with Island. After the release of "Bulletproof Heart" in 1989, the singer didn't release a full-length album until 2008's "Hurricane."

Acting Career: After showing up in a handful of low-budget films throughout the 70s and early 80s, Jones landed her first mainstream role in 1984's "Conan the Destroyer," playing Zula the Amazonian opposite Arnold Schwarzenegger. The next year she played the henchman May Day in the James Bond film "A View to a Kill." Some of Jones' other notable movies include the vampire film "Vamp," and the Eddie Murphy comedy "Boomerang," for which she also wrote a song.

Image and Influence: Jones is recognized as much for her music as for her striking and flamboyant appearance, which has exerted a wide-ranging influence over the fields of fashion and photography. Much of this is also due to the contributions of the French graphic designer Jean-Paul Goude, who helped develop Jones' image by designing her album covers, choreographing her performances, and directing her music videos. Goude's and Jones' work was provocative and often controversial, producing hyper-sexualized and racialized images that turned the singer into an exotic spectacle. In any case, Jones' androgyny, long limbs, and angular clothing helped shape a prominent aesthetic that has influenced the likes of Madonna, Beyoncé, Björk, and a myriad of others. As a mark of her enduring sartorial influence, in 2013 the Guardian listed Jones as one of the "50 best-dressed over 50."

Other Collaborations and Appearances: Jones has collaborated with a wide range of artists across her career, sometimes for philanthropic purposes. In 2002, she joined Luciano Pavarotti in concert to support the UN's programs for Angolan refugees in Zambia. She joined Deborah Harry, Sharon Stone, and Bebel Gilberto in São Paulo in 2012 to raise money for the Foundation for AIDS Research. Other appearances have taken place at London's Wembley Arena; at the opening ceremony of the 61st FIFA Congress; and at the Diamond Jubilee of Queen Elizabeth II.

Personal Life: Throughout her life, Jones kept a fraught relationship with her Pentecostal father, who disapproved of her secular singing career. In contrast, her mother was supportive, even adding her vocals to her daughter's tracks "My Jamaican Guy" and "Williams' Blood." Due to Jones' harsh, religiously dogmatic upbringing, the singer has stated her refusal to ever enter a Jamaican church again.

Although they never married, Jones maintained a relationship with her longtime collaborator Jean-Paul Goude, producing one son, Paulo. She also dated Swedish actor and her former bodyguard Dolph Lundgren for four years, and dated Danish actor and stuntman Sven-Ole Thorsen for several years. Since 1996, Jones has been married to Atila Altaunbay, a native of Turkey. 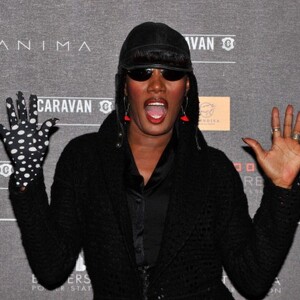