What Is Gabrielle Reece's Net Worth?

Gabrielle Reece is an American volleyball player, television host, model, writer, and actress who has a net worth of $25 million. That is a combined net worth with her husband, professional surfer Laird Hamilton.

Reece is best known for her career as a professional volleyball player, and she also launched a successful modeling career, appearing in such magazines as "ELLE," "Shape," "Outside," and "Women's Sports and Fitness." Gabrielle also appeared on the cover of "Playboy" and was chosen as one of the most "Beautiful Women in the World" by "ELLE."

Gabrielle Reece was born Gabrielle Allyse Reece on January 6, 1970, in La Jolla, California. She is the only child of Robert Eduardo Reece and Terry Glynn, and sadly, Robert died in a plane crash when Gabrielle was just 4 years old. At age 2, Reece moved in with family friends in New York, and she lived with them until she was 7. She then lived in Saint Thomas, U.S. Virgin Islands, with her mother and stepfather. The family moved to St. Petersburg, Florida, when Gabrielle was a teenager, and she attended Keswick Christian School and began playing volleyball. After graduating from high school, she attended Florida State University on a volleyball scholarship. At FSU, she majored in communications and set volleyball records in total blocks (747) and solo blocks (240). Gabrielle moved to New York City in 1989 to pursue a career in pro volleyball and sports fashion modeling. In 1997, she was inducted into the Florida State University Athletics Hall of Fame.

After playing two seasons at FSU, Reece was named Offensive Player of the Year for the 1994-1995 season, and in 1994, she became the first female athlete to design a Nike shoe as well as Nike's first cross-training spokeswoman. Nike released Gabrielle's Air Trainer shoe in in 1994, followed by the Air Patrol (1995), Air GR (1997), and Air GR II (1998), and they all went on to outsell the Air Jordan. Reece served as a team captain in the Women's Beach Volleyball League (WBVL) for several years, and in 1997, her four-person team won the Beach Volleyball World Championships. She competed in the 1999-2000 FIVB Beach Volleyball World Tour and Olympic 4 on 4 Challenge Series, and she later spent four years training to be a golfer, but in 2009, she told "Parade" magazine, "With young children, I simply didn't have the time for such a demanding game." In 1997, "Women's Sports & Fitness" included Reece on its "20 Most Influential Women in Sports" list, and she appeared on the cover of the issue. The magazine's editor explained why Gabrielle was chosen for the cover, writing, "I believe she represents, finally, the answer to all the image-questing pendulum swinging of the decades gone by. Who is the female athlete? She is everything once thought to be an inherent contradiction. She is strong and beautiful, sweaty and feminine, tough and ladylike." 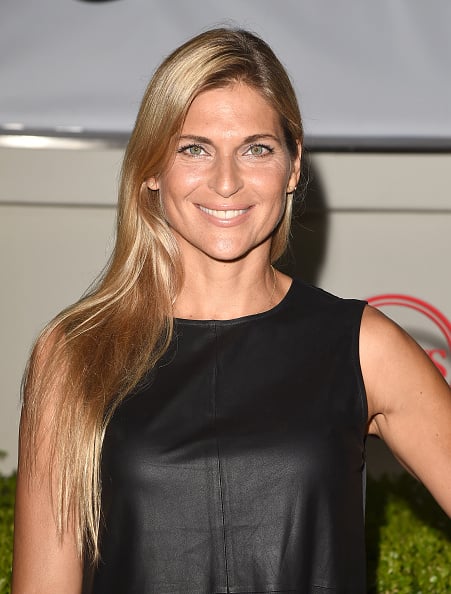 Reece created the fitness program HIGHX, and she co-created Extreme Performance Training XPT with her husband, Laird Hamilton. In 2018, the couple appeared on the Outside Television series "XPT :The Experience." Gabrielle also produced an infomercial for a fitness product called The Primal System and hosted Fit TV/Discovery's "Insider Training." In 2008, she became a spokeswoman for Simply Nutrilite and released "Gabrielle Reece: Fit & Healthy Prenatal Workouts." She spoke at the 2012 TEDMED conference in Washington, D.C., and she is involved with the American Heart Association Teaching Gardens, speaking to children about the importance of exercise and healthy eating. Reece has hosted "Men's Health Minutes" (2006) and "Power Players: Sports' Hottest Couples" (2013), and she has appeared in the documentaries "Riding Giants" (2004) and "Take Every Wave: The Life of Laird Hamilton" (2017). She has been a guest on numerous talk shows, including "Late Night with Conan O'Brien," "Chelsea Lately," "The Ellen DeGeneres Show," and "Rachael Ray," and she served as a guest host on "The View" in 2013. Gabrielle has also appeared on "MTV Sports," "The Extremists with Gabrielle Reece," "Gravity Games," "Fast Cars and Superstars: The Gillette Young Guns Celebrity Race," "Extreme Makeover: Home Edition," "Celebrity Blackjack," and "Hollywood Squares."

Gabrielle married surfer Laird Hamilton on November 30, 1997, and they have two daughters, Reece (born October 2003) and Brody (born January 2008). Gabrielle is also stepmother to Izabela, Laird's daughter from his marriage to clothing designer Maria Souza. In 2015, Reece and Hamilton launched Laird Superfood, a company dedicated to providing "great tasting plant-based products that are high-quality, convenient, and available to all."

In July 2011, Reece and Hamilton put their 5,000+ square foot home in Maui, Hawaii, on the market for $2.79 million. The four-bedroom, four-bathroom home sold for $2.4 million two months later. The home, which the couple built in 2004, sits on 9.99 acres and includes a wraparound canopy lanai that measures more than 1,000 square feet. The property also features a "one million gallon fish pond overlooking tranquil gardens." The home was featured on "MTV Cribs" in 2006.