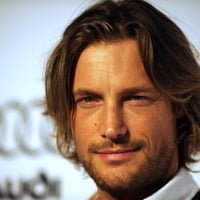 Gabriel Aubry Net Worth: Gabriel Aubry is a Canadian model and musician who has a net worth of $4.5 million. Gabriel Aubry first became famous by modeling for fashion designers such as for Tommy Hilfiger, Gianni Versace, and Calvin Klein. Born in Quebec, Canada, in 1975, into a family with nine children, Gabriel Aubry has made his career modeling for international brands such as Versace, Calvin Klein, Valentino, Tommy Hilfiger and DKNY. The six-foot-two Canadian made his TV debut with a Macy's commercial with stars Carlos Santana, Mariah Carey, Donald Trump and Martha Stewart. He has modeling contracts with Italy's Beatrice Model Agency and New York City's Wilhelmina Models, and has been named to "People" magazine's list of the most beautiful people in the world. Aubry gained fame for his public relationship with actress Halle Berry, which began in late 2005 after they met on the set of a photoshoot. They had a daughter, Nahla Ariela, together in 2008 and announced they were separating two years later. Berry's attempt to move with Nahla to France to be with her new partner, Olivier Martinez, catapulted the former lovers into the public spotlight after Aubry complained the plan would make their joint custody arrangement difficult. In late 2012, a judge blocked Berry's move overseas and Martinez took out an emergency protective order against Aubry, who then got a restraining order against Martinez after the model alleged he was assaulted. In 2012, the former couple reached a new custody agreement, and in early 2014, Berry was ordered to pay child support. Before his split from Berry, Aubry produced an album called "Café Fuego Vol. 1" designed to recreate his former restaurant's atmosphere.