How much is Eva Herzigova Worth?

Eva Herzigova net worth: Eva Herzigova is a Czech model and actress who has a net worth of $12 million. Eva Herzigova first became internationally famous when she appeared as the 1994 model for the first Wonderbra campaign, as well as the featured model for the popular Guess? Jeans advertisements. She was a member of Thomas Zeumer's Metropolitan models and also appeared in the Victoria's Secret catalog and Sports Illustrated. She was born in Litvinov, Usti nad Labem Region, Czechoslovakia on March 10, 1973. She was married to the drummer of the American rock band Bon Jovi Tico Torres from September 1996 until June 1998. Eva and her current boyfriend Gregorio Marsiaj have two sons. She has appeared in several movies such as the 1992 blockbuster Inferno, Just for the Time Being in 2000 and in 2004 the short film Twisted Tango, where she was also the Costume Designer. Eva was the Venus at the 2006 Winter Olympics Opening Ceremony. She was the print ad model for the Maybelline cosmetics line from 1995 until 1998. She appeared as herself on 4 episodes of the French comedy/talk show Le grand journal de Canal, as well as such American TV shows as Late Night with David Letterman, and Friday Night with Jonathan Ross. 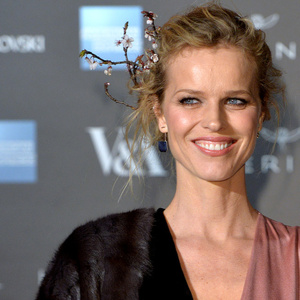