Erin O'Connor net worth: Erin O'Connor is an English fashion model who has a net worth of $16 million. Erin O'Connor was born in Brownhills, West Midlands, England in February 1978. She was discovered by a talent scout on a school trip. O'Connor has modelled on the catwalk for Christian Dior, Prada, Donna Karan, Giorgio Armani, Versace, Jean-Paul Gaultier, Dolce & Gabbana, and more.

She has been featured in several magazines including Elle, W, Vogue, Harper's Bazaar, and more and was on the cover of British Vogue. Erin O'Connor has written a column for London Fashion Week paper The Daily Rubbish and appeared on television and radio. She launched a line of fairtrade and eco friendly cotton T-shirts and bags. In 2017 Erin O'Connor was appointed Member of the Order of the British Empire for services to fashion and charity. She also co-founded All Walks Beyond the Catwalk in 2009 with Caryn Franklin and Debra Bourne. 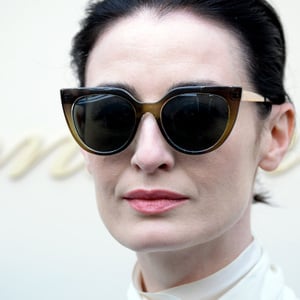