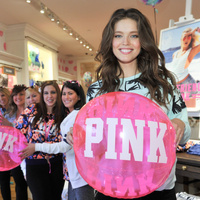 Emily DiDonato Net Worth: Emily DiDonato is an American model who has a net worth of $2 million. Emily DiDonato was born in Goshen, New York, in 1991. She signed her first deal with Request Model Management in 2008. Within a year, DiDonato became the face of the Guess? spring line and was chosen to model Ralph Lauren's "Rugby" line. That year, DiDonato scored an advertising deal with cosmetic giant Maybelline New York when she was just 18 years old. Her first TV commercial was for the brand's line of color sensational lip colors. She appeared alongside models Julia Stegner, Jessica White, and Christy Turlington in the advertisements. Later in 2009, DiDonato landed a job modeling with Victoria's Secret. Within two months, she graced her first magazine cover and was named the top newcomer in modeling by German "Vogue". In 2010, DiDonato advertised Armani's new fragrance, Acqua Di Gioia. She appeared in her first "Sports Illustrated Swimsuit Issue" three years later in 2013. DiDonato also landed an advertising deal with Oysho that year. She has since appeared in several magazines, including "Elle France", "Vogue Australia", "Vogue Paris", and "Details". The brown-haired, blue-eyed model is now represented by IMG Models in several nations, including Italy, England, France, and the United States.