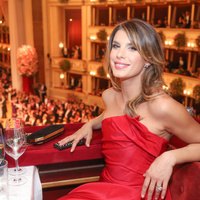 Elisabetta Canalis Net Worth: Elisabetta Canalis is an Italian actress and model who has a net worth of $13 million dollars. Elisabetta Canalis has appeared in ad campaigns for L'Oreal and in a spread in Maxim, among other modeling gigs. She has also worked on television in both Italy and the US, co-hosting the Italian "Total Request Live", and appearing in the films "Deuce Bigelow: European Gigelow", and the television show "Leverage". She was born September 12 1978, in Sassari, Italy. Canalis made her way into American cinema with minor roles in movies like Deuce Bigalow: European Gigolo and Virgin Territory. While in her native Italy, she found a niche in the entertainment industry working as a host and presenter on a multitude of talk shows, scripted dramas and variety programs. After high school, Elisabetta decided to continue her education studying foreign languages at a prestigious university in Milan. During her stay in Milan, she started exploring the possibility of becoming an actress, as she was auditioned for as many projects as she could find. It was in 1999 that she successfully landed a gig on a variety show called Striscia la notizia. She remained with the program for three years, winning Italian audiences with her interesting persona and exceptional talent. Meanwhile, Canalis also joined the reporting team of Controcampo, a show devoted to the ins and outs of a multitude of different sports. Initially responsible for providing commentary for Italian soccer games, she soon started dating a well-known player named Christian Vieri. She was on the rise to international fame, when she started to star in small American movie projects, as well as she appeared in ad campaigns for L'Oreal and in a spread in Maxim, among other modeling gigs. Elisabetta Canalis made headlines with her high-profile relationship with George Clooney, from 2009 until 2011. Following their break-up in 2011, Canalis appeared on the 13th season of Dancing with the Stars and was interviewed on The Ellen DeGeneres Show.