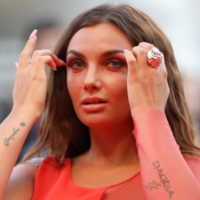 Elettra Lamborghini was born in Bologna, Italy in May 1994. Elettra Lamborghini released her debut studio album Twerking Queen in 2019 on Universal Music. Her single "Pem Pem" reached #6 in Italy. Elettra Lamborghini's singles "Mala" reached #13 in Italy and she also had success with the single "Tocame" (featuring Pitbull and Childsplay). She was featured on the singles "Lamborghini RMX" by Gue Pequeno and Sfera Ebbasta and "Cupido Remix" by Sfera Ebbasta featuring Quavo, Duki, and Khea which both reached #1 in Italy. Elettra Lamborghini has been featured on several TV series including Super Shore, Ex on the Beach Italia, The Voice of Italy, #Riccanza, Pomeriggio Cinque, Domencia Live, Gran Hermano VIP, Geordie Shore, and Acapulco Shore. Her styles of music include Latin, Reggaeton, and trap.