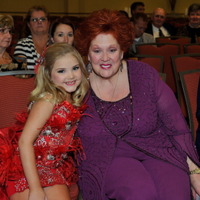 Eden Wood net worth: Eden Wood is an American child beauty pageant contestant, reality television star, and actress, who has a net worth of $100 thousand dollars. Born in Arkansas, Eden Wood began competing in pageants just after her first birthday. She continued competing until she was six, and first gained widespread notice appearing on the reality show, "Toddlers and Tiaras". In addition to her multiple appearances on "Toddlers and Tiaras", she was also featured on segments of such news shows as, "Nightline", "60 Minutes", and "Good Morning America". She is the face of the children's boot brand, Cicciabella, and also has her own line of clothing, called The Eden Wood Line. She is set to launch a line of dancewear next. She will make her professional acting debut in the remake of "The Little Rascals", as Darla, in 2013. She also appears on her own series on Logo, called "Eden's World".