Donna Feldman Net Worth: Donna Feldman is an American model, television host, and actress who has a net worth of $500 thousand. Donna Feldman was born in Calabasas, California in April 1982. She was discovered while studying at the Faison Institute of Design and Merchandising. She has worked as a worldwide commercial fashion model and has been in magazines such as Maxim, GQ, Marie Claire, FHM, and Esquire.

Feldman has appeared in advertising campaigns for Visa Blackcard, Kardashian Kollection, Bebe, Bellagio Resort, Caesar's Palace, Christian Audigier, Diesel, Jaguar, Lucky Brand, Nautica, Panasonic, Revlon, Sean John, Verizon Wireless, and many more. She is signed with Next Models and Ford Models in the United States. Donna has starred in music videos by Justin Timberlake, Dwight Yoakam, Sugar Ray, and Enrique Iglesias. From 2006 to 2007 she was a model for Deal or No Deal. In 2006 she starred in the TV series Fashion House. She also starred as Michal in the 2008 movie You Don't Mess with the Zohan. She has also appeared in episodes of the TV series Nub TV, Red Eye, Fashion Television, Las Vegas, Chuck, Deadliest Warrior, and Castle. 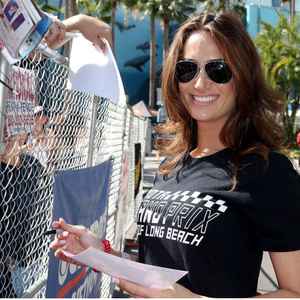