Derrick Barry net worth: Derrick Barry is an American drag performer and reality television personality who has a net worth of $3 million. He is best known for appearing on the reality TV series America's Got Talent and RuPaul's Drag Race.

Derrick Barry was born in Modesto, California in July 1983. He was named one of the top 100 Most Powerful Drag Queens in America by New York magazine in 2019 and is known for being a Britney Spears impersonator. Barry released the single "BOOMBOOM" with Chris Cox in 2016. He appeared in the films Sharknado: the 4th Awakens and War on Everyone. Derrick Barry appeared on the reality TV series America's Got Talent in 2008 and RuPaul's Drag Race in 2016. He has also appeared in episodes of the TV series Dig, RuPaul's Drag Race: Untucked, Gay for Play Game Show Starring RuPaul, Germany's Next Topmodel, The Talk, Will and Grace, and more. Derrick Barry appeared in the music videos "We Made You" by Eminem and "Waking Up in Vegas" by Katy Perry. 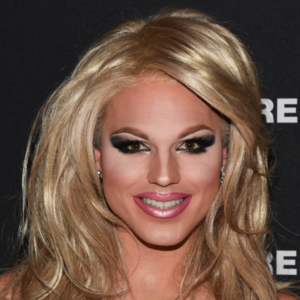