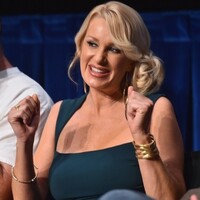 Darva Conger net worth: Darva Conger is an American reality television personality and former emergency room nurse who has a net worth of $500 thousand. Darva Conger was born in Carbondale, Illinois in September 1965. She is best known for being the winner of the reality TV series Who Wants to Marry a Multi-Millionaire? in 2000. Conger served in the United States Air Force. She studied nursing at Southern Illinois University. During the show which was a single airing two hour broadcast, Conger was chosen by Rick Rockwell to be his wife and married her on the spot. Conger won a 3 carat diamond ring and over $100,000 in prizes. After their honeymoon Conger was granted an annulment claiming that Rockwell had misrepresented himself. After the episode Conger made many public comments regarding the situation. She posted nude for Playboy magazine in August 2000. Conger and Rockwell appeared on The Larry King Show in 2001. In 2002 Darva defeated Olga Korbut on an episode of the TV series Celebrity Boxing. Conger later married and divorced Jim Arellano and works as a Nurse anesthetist in Northern California.