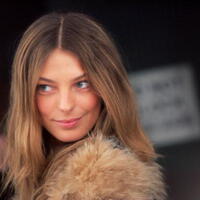 Daria Werbowy net worth: Daria Werbowy is an Ukrainian Canadian model best known as the spokesperson for Lancome who has a net worth of $28 million. Daria Werbowy was born in Krakow, Poland in 1983 to Ukranian parents. When she was three years old, her family moved to Mississuaga, a suburb of Toronto, Ontario, Canada. Daria Werbowy was 5'11" tall by the time she was 14-years old. Sporting a mouth full of braces, Daria Werbowy won a national model contest when she was fourteen. Signing with Elite Model Management, Werbowy booked work in Canada, but had a hard time breaking into international bookings and divided her time between London and Greece. After eight months, she decided to return to Canada and gave modeling one final shot as a means to pay for art school. She went to New York to meet with her agent. The next day she signed an exclusive contract with Prada. Since then Daria Werbowy has worked non-stop for such fashion brands as Prada, Yves Saint Laurent, Gucci, Valentino, Hermes, Versace, and Chanel amongst others. In July 2007, Daria Werbowy was named by Forbes the ninth highest earning model in the world with $3.5 million in earnings between June 2006 and June 2007.