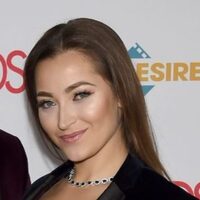 Dani Daniels net worth: Dani Daniels is an American adult film actress, visual artist and social media influencer who has a net worth of $800 thousand. Dani Daniels was born in Orange County, California in September 1989. She started dancing at adult clubs to pay off her student debt. She joined the adult industry in 2011. Daniels started as a webcam model before moving into films. To date she has more than 250 acting credits to her name and has done a little bit of directing as well. Daniels was named one of CNBC's most popular adult film stars in 2014 and 2015. Dani Daniels has also won several awards including an AVN Award for Social Media Star in 2015 and an XBIZ Award for Female Performer of the Year in 2016. She collaborated with Doc Johnson in 2015 to create a line of adult toys and won an AVN Award for Most Amazing Sex Toy. She is also a painter, media host and a blogger. As an artist she creates work under the name Kira Lee. She hosts the periodic round-table discussion show "Dinner with Dani" which can be seen on Amazon and YouTube. She married TV producer Victor Cipolla in 2017.