Cyn Santana net worth: Cyn Santana is a reality television star who has a net worth of $900 thousand. Cyn Santana is best known for appearing on the VH1 reality series, Love & Hip Hop: New York. Her mother is from El Salvador and her father is Dominican but she is second generation. Santana describes herself as "mad Spanish". She got famous from doing impressions of Nicki Minaj and Kat Stacks on youtube. Cyn is unlike most video vixens. Cyn Santana is going to school for Psychology at SUNY in New York. Despite her lifestyle hanging out with rappers and ballers Santana knows that lifestyle will not last forever. When she graduates, she wants to be a social worker and help underprivileged women. At one time, she was dating fellow Love & Hip Hop: New York star, Erica Mena; who is now engaged to Bow Wow; the couple's relationship drama still makes its way into the show from time to time. In 2013, Cyn Santana was rumored to be dating Drake after becoming acquainted on the set of 2 Chainz's "No Lie" music video. There was never any confirmation that the pair were anything more than friends, but they did spend quite a bit of time together during the production.

Cyn has a child with rapper/podcaster Joe Budden. They were engaged at one point but eventually broke up. 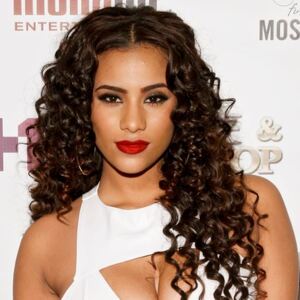