Crystal Renn net worth: Crystal Renn is an American fashion model and author who has a net worth of $6 million dollars. Born June 18, 1986 in Miami, Florida, she began her modeling career in high fashion at the age of 14 after she was spotted by a professional modeling scout in her hometown of Clinton, Mississippi.

At that time she was told she would need to lose almost one-third of her body weight if she wanted to become a model. After years of living with anorexia nervosa, Renn made the conscious decision to gain back some of the weight and subsequently gained 70 pounds and re-emerged as a U.S. size 12 and was then marketed by her agents as a plus-size model. Renn wrote a book called Hungry: A Young Model's Story of Appetite, Ambition and the Ultimate Embrace of Curves, a story about her experiences in the fashion industry in relation to her body type transformations over her career. In November 2010, Renn said she had lost weight through hiking and yoga and that her dress size had dropped to a U.S. size 8. Renn has worked many times with notable fashion photographers Ruven Afandor and Steven Meisel. In the year 2007 she further distinguished herself within the fashion industry by appearing in back to back campaigns alongside typically thin models without any notation of her own size, using the term "plus-sized" or otherwise – an unusual occurrence in the always size-conscious world of fashion.  Over the course of her career in modeling, she has modeled for the likes of Lane Bryant, Chanel, Jean-Paul Gaultier, Dolce & Gabbana, Saks Fifth Avenue, Jimmy Choo, Nordstrom and Barneys. She has also graced the pages of many international issues of Vogue, Italian Elle, Russian, Australian and American Harpers Bazaar, Glamour and Vanity Fair. She also appeared in the 2012 Sports Illustrated Swimsuit Issue. 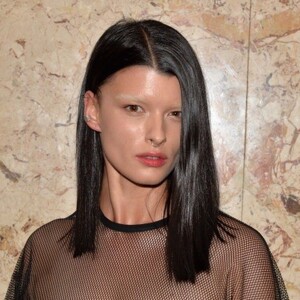