How much is Coleen Rooney Worth?

Coleen Rooney net worth: Coleen Rooney is best known for being the wife of Manchester United and England football star Wayne Rooney. She has also developed a career as a TV presenter, columnist and celebrity product endorser and is regularly mentioned in British tabloid media. She has a net worth $19 million. Coleen Rooney earned her net worth as a TV presenter and columnist. She was born in Liverpool, Merseyside, to Tony McLoughlin, who was a bricklayer and ran a boxing club, and his wife Colette, who was a nursery nurse. She first met Wayne Rooney when she was 12 years of age. Wayne and Coleen Rooney were known in the papers as the King and Queen of Chavs, and many of the tabloids focused on Coleen's enthusiasm for shopping. On 12 June 2008 Coleen McLoughlin and Wayne Rooney married in a ceremony on the Italian Riviera. She had her own column in the celebrity magazine Closer entitled "Welcome to My World". In 2007 her autobiography, Welcome to My World, was released. In 2008 she then went on to write a weekly column for OK! Magazine. She has an exercise DVD on sale in the UK, entitled Coleen McLoughlin's Brand New Body Workout, which became a bestseller. She also has her own line of fragrances, and writes columns for top magazines, and is the face of countless advertising campaigns. She has become known as quite a style icon, best known for wearing high street fashion over designer. She has won countless style awards thanks to her down to earth approach, even appearing in British Vogue! She was paid £500,000 to be the face of the LG Electronics Chocolate mobile phone advertising campaign. On 2 November 2009, she gave birth at Liverpool Women's Hospital to a boy Kai Wayne. Coleen Rooney was born on April 3rd, 1986 in Liverpool, England. She is of Irish descent and is the eldest of four children. 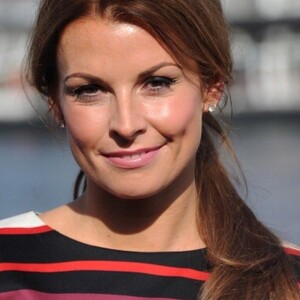