China Chow Net Worth: China Chow is a British actress and model who has a net worth of $10 million. China Chow has earned her net worth from her career as a model for Shiseido cosmetics, Tommy Hilfiger and Calvin Klein. Some of her acting credits include; the 1998 film The Big Hit where she starred with well-known actor Mark Wahlberg, she also starred in the 2007 USA Network's first season of Burn Notice as former spy Lucy. She was born in April of 1974 in London, England, his father restaurateur Michael Chow and her mother was the late model / designer Tina Chow. She has a younger brother and her aunt is Tsai Chin an actress and one-time Bond girl. China is of Chinese, Japanese, German, and Scottish descent. Some of her romantic interests include; actor Mark Wahlberg and comedian/actor Steve Coogan. During her modeling career she was named Vogue magazine's "The Next Best-Dressed List", in December 1996, and later in 2000 she posed for Maxim magazine, in a B&W photo spread that was featured on Girls of Maxim gallery. On Bravo television's new competitive reality show, Work of Art: The Next Great Artist, Chow appears as a host and a judge. This new reality series premiered on June 9, 2010, she is also the voice of the character of "Katie Zhan" in Grand Theft Auto: San Andreas, a popular video game. 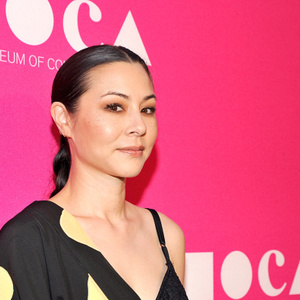