Carmen Carrera, born Christopher Roman in Elmwood Park, New Jersey, is a transgender woman. Carrera was featured in a W series art shoot as the face for the fictional fragrance La Femme. In 2011, Carrera, along with fellow Drag Race contestants Manila Luzon and Shangela Laquifa Wadley, appeared in a television commercial for the travel-related website Orbitz. In 2012, she appeared in an episode of the TLC series, Cake Boss, called "Bar Mitzvah, Beads & Oh Baby" where she was part of a prank where she was set up on a date with the Cake Boss' cousin Anthony. Carrera was not aware that she would be involved in a joke and later complained about the situation in her social media account. In 2014, Carrera was included as part of the Advocate's annual "40 under 40" list and made a cameo appearance on Jane the Virgin's premier episode. Also in 2014, Carrera was featured on the fifth anniversary cover of C☆NDY magazine along with 13 other transgender women: Janet Mock, Laverne Cox, Geena Rocero, Isis King, Gisele Alicea, Leyna Ramous, Dina Marie, Nina Poon, Juliana Huxtable, Niki M'nray, Pêche Di, Carmen Xtravaganza and Yasmine Petty. She has been in a domestic partnership with Adrian Torres since 2009, but the couple faced a breakup in 2013 due to infidelity. In 2015, in an effort to repair their relationship, the pair appeared on Couples Therapy to work through their issues. 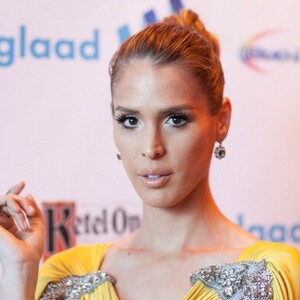