CariDee English net worth: CariDee English is an American fashion model and television personality who has a net worth of $2 million. CariDee English was born in Fargo, North Dakota in September 1984. She won Cycle 7 of America's Next Top Model in 2006. She received a $100,000 contract with CoverGirl Cosmetics as well as a modeling contract with Elite Models and a fashion editorial and cover for Seventeen magazine.

English became the first natural blonde to win America's Next Top Model and the second winner from North Dakota (Nicole Linkletter). Before appearing on the show she worked as a photographer and was an actress in the sketch comedy group The 4th Option. English has modeled for JC Penney, L'Oreal Fashion Week in Toronto, New York Fashion Week, and Los Angeles Fashion Week. As an actress she appeared on episodes of the TV series One Tree Hill, How I Met Your Mother, and Gossip Girl and also starred in the shorts Breaking Up and Away in 2013 and I Choose in 2014. In 2009 she hosted the TV series Pretty Wicked. English is a drummer and has appeared on an album by Brad Walsh. She formed the group LUVnENGLISH with celebrity DJ Lindsay Luv. She also serves as a spokesperson for the National Psoriasis Foundation. 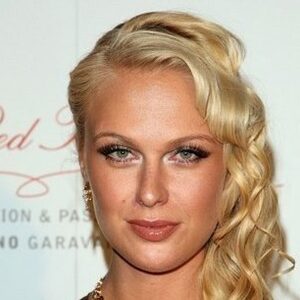