She has appeared in such film and television productions as Hospital, The Dream Team, Bang Bang, It's Reeves and Mortimer, Baywatch, Stars in Their Eyes, Holly Oaks: After Hours, Loose Women, Celebrities Under Pressure, Celebrity Big Brother 2005 (UK), Ireland AM, Xpose, Hole in the Wall, Big Brother's Little Brother, The King is Dead, Celebrity Juice, and Daybreak. As a model, she has appeared on the covers and in editorials for over 200 magazines, including Vogue, GQ, Cosmopolitan, Maxim, FHM, and Sports Illustrated. She was named both GQ's "Woman of the Year" and Maxim's "International Woman of the Year", three years in a row. She also has her own lines of swimwear, sleepwear, lingerie, and bedding. Bourret recently made headlines because she had two sons who were born one month apart; one child was born via a surrogate and the other Bourret carried to term.  Bourret originally arranged to have a surrogate in America aide her in having a child because she was told she could not have a child herself. Once the child was a month along, Bourret defied the odds and became pregnant herself. She disclosed the story to the media and told it in her own words because she did not want them taking the story and twisting it. 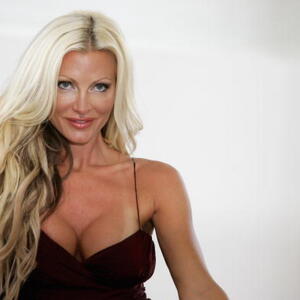