Candice Crawford is an American former reporter and beauty queen who has a net worth of $10 million. Candice Crawford gained her net worth working for television stations such as KDAF (covering high school sports) and by marrying professional football player Tony Romo. During her college years, Texas-born Crawford was a Dallas Cowboys reporter on CBS show, The Blitz. In addition to this Crawford hosted Dallas Cowboys' Weekend Sports Show, Special Edition. She also worked as a reporter for NBC's KOMU-TV, while studying journalism and business at the University of Missouri. The blonde beauty went on to host Dallas guide show, Up All Night as well as co-presenting lifestyle show, The RC Project. Crawford was also a beauty queen, competing in Miss Texas Teen USA in 2003 and 2005, where she was placed third runner-up. She went on to enter the Miss Missouri competition in 2007 before her striking good looks led her to win the same competition in 2008. Crawford represented Missouri in Miss USA, where she came sixth in the competition. The younger sister of Gossip Girl's actor Chace Crawford is married to Dallas Cowboy quarterback Tony Romo. The couple had their first child, Hawkins Crawford Romo, in April 2012. 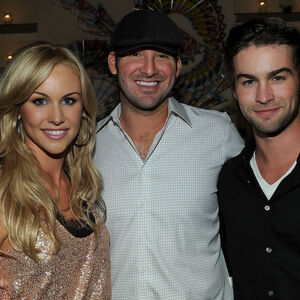