What Is Camila Alves' Net Worth?

Camila Alves (also known as Camila Alves McConaughey) is a Brazilian model, designer, television host, and author who has a net worth of $20 million. Camila Alves is the wife of actor Matthew McConaughey, and the two co-founded the charitable organization the Just Keep Livin' Foundation. Camila began a successful modeling career after moving to the U.S., and she eventually began designing the Muxo handbag line with her mother, Fatima Saraiva. Alves appeared in Bon Jovi's "Misunderstood" music video (2002), Chingy's "Pullin' Me Back" music video (2006), and Ne-Yo's "Because of You" music video (2007), and she hosted the Bravo reality television series "Shear Genius" in 2010 and co-hosted the Food Network's "Kids BBQ Championship" with Eddie Jackson in 2016. In 2012, she became the face of Macy's I.N.C. International Concepts clothing line, and in 2016, she launched the Women of Today lifestyle website. Since 2014, Camila has co-owned Yummy Spoonfuls, an organic food company, with Agatha Achindu, and the two began selling a line of "unprocessed, naturally nutritious, organic — and affordable" baby and toddler food at Target in 2016. In 2022, Alves published the children's book "Just Try One Bite," which she co-wrote with Adam Mansbach, the author of "Go the F**k to Sleep."

Camila Alves was born on January 28, 1982, in Itambacuri, Minas Gerais, Brazil. Her mother is an artist and designer, and her father is a farmer. According to her website, Alves has a "kind and strong brother who developed diabetes at a young age in childhood." When Camila was 15 years old, she visited her aunt in Los Angeles and decided to stay there. Alves spent four years cleaning houses and working as a waitress, then she decided to become fluent in English and make the U.S. her permanent home.

Camila moved to New York City at the age of 19 to pursue a modeling career, and she later began designing handbags with her mother. Their Muxo handbag line was developed after three years of experimenting with different designs and styles. Alves told "Beverly Hills Lifestyle Magazine" in 2011, "The line is pronounced 'Moo-show.' It means a goddess of the water in an African language. The word is spelled backwards, because I like a twist. I was modeling at the time. We were looking for an extra way to make a little more money to help our family back home. In Brazilian culture, once you leave, you always look out for the family. My mom has three degrees in design in Brazil and she's very talented. We decided to get together and create a product." In 2010, Camila hosted the third season of the Bravo hair styling competition series "Shear Genius. In 2014, Alves and Agatha Achindu launched Yummy Spoonfuls, a line of "frozen baby food made from fresh, organic and wholesome fruits, vegetables, legumes, whole grains and pastured meats." When the two moms weren't able to find the "freshest, tastiest, most nutritious foods" to feed their children, they teamed up and decided to make the food themselves. 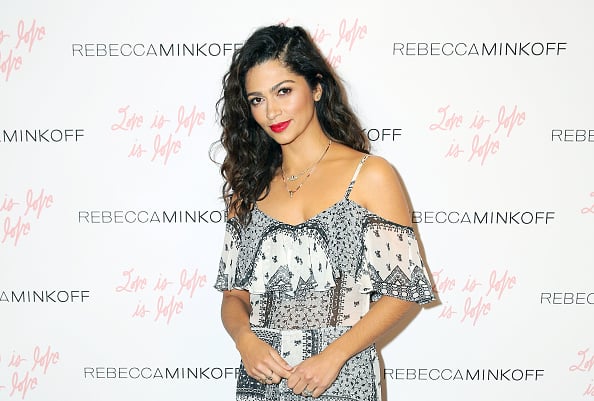 In 2016, Camila launched the Women of Today website, which is described as a "joint ownership of individuals committed to the values of community." The website features recipes and information about health, fashion, beauty, and home decor. Camila created the website to be a place where women can "support each other, share our stories, and find strength in numbers." She told "People" magazine, "Throughout the years I have learned that I love anything to do with cooking, decorating, kid activities, beauty and fashion, [and] if I can teach something that I have learned and make anyone's life easier, as it did for me, then that makes me happy!" Also in 2016, Alves and Eddie Jackson co-hosted the first season of the competition series "Kids BBQ Championship" on the Food Network. Camila has also appeared on shows such as "Chelsea Lately," "Jimmy Kimmel Live!," "The Bonnie Hunt Show," "The View," "The Chew," "Rachael Ray," "The Talk," "Live with Kelly and Ryan," "The Drew Barrymore Show," "The Wendy Williams Show," "Today," and "The Kelly Clarkson Show."

Camila met Matthew McConaughey at a West Hollywood bar in 2006, and they became engaged on Christmas in 2011. The couple married on June 9, 2012, in a private Catholic ceremony in Austin, Texas, and they have a daughter, Vida (born January 2010), and two sons, Levi (born July 2008) and Livingston (born December 2012). Alves became a naturalized American citizen in August 2015, and after the naturalization ceremony, Camila tweeted, "Happy to say I now hold an American passport! I have so much respect and appreciation for this country." In 2010, Camila and Matthew established the Just Keep Livin' Foundation, a "non-profit foundation committed to empowering high school students by providing them with the tools to lead active lives and make healthy choices for a better future." In 2019, the foundation partnered with fashion brand Veronica Beard, and when the brand's Palisades store opened, a portion of the profits during the first five days of business were donated to the Just Keep Livin' Foundation. In May 2020, Camila and Matthew distributed more than 100,000 face masks to Texas hospitals during the COVID-19 pandemic.

Camila and Matthew live in a 10,800 square foot mansion in Austin, Texas. The lakefront home was built in 1997 and sits on nine acres of land. The mansion includes seven bedrooms, eight bathrooms, an elevator, and a guest house. The couple previously lived in a 3,831 square foot Malibu mansion, which Matthew purchased for just over $10 million in 2007. They sold the home to filmmaker Phil Lord for $14.8 million in 2020.