Brittany Kerr net worth: Brittany Kerr is an American cheerleader and reality television personality who has a net worth of $10 million. Brittany Kerr was born in Charlotte, North Carolina in June 1988. She married Jason Aldean in 2015 and the couple has two children. Kerr auditioned for the reality television series American Idol in 2012. In 2013 she served as a production assistant for the TV movie Against the Wild. Brittany Kerr appeared in an episode of the TV series Celebrity Page in 2018. Jason Aldean was married to Jessica Ussery when he admitted to acting inappropriately at a bar with Kerr. He filed for divorce in 2013 and began dating Kerr and the couple made their first public appearance together in 2014 at the CMT Awards and announced their engagement later that year. In 2017 their first child son Memphis Aldean was born and in 2019 their first daughter Navy Rome was born. 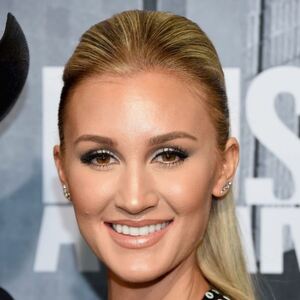