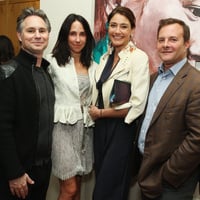 Brenda Schad is a Native American model who has a net worth of $5 million. Brenda Schad gained her net worth through appearing on front covers of renowned magazines including GQ UK, Vogue, Cosmopolitan UK and Elle. Schad was brought up by her adoptive parents after her teenage mother give up for adoption. Her modelling career began at the age of 14 – she was approached whilst trying on a swimming suit in a store in Japan. She soon appeared on Wonderbra advertisements and quickly became Miss Wonderbra. Signed with Elite Model Management in Paris and Premier in London, Schad also modelled for Lord & Taylor, Van Cleef & Arpels. Schad also made brief appearances in the film world, featuring in Running in Heels and D.R.E.A.M Team Besides modelling Schad is a general contractor and has worked all over the world including Paris, Marbella, Los Angeles and New York. She's also an advocate for Native American issues and has founded the Native American Children's Fund. The mother of two speaks four languages: English, French, Italian and Japanese.