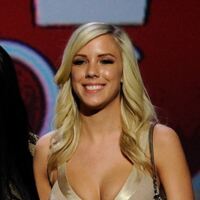 Bibi Jones net worth: Bibi Jones is American adult film actress who has a net worth of $800 thousand. Bibi Jones gained mainstream notoriety after she appeared in racy photos with NFL player Rob Gronkowski. After the photos were released, an adult film company offered Gronkowski $3.7 million to film a scene with Bibi. He declined the offer.

Bibi Jones was born Britney Maclin on July 23, 1991 in Oklahoma City, Oklahoma. Her birth name is Britney Maclin. At the age of 19, Bibi began stripping in Arizona. That same year she became the youngest actress ever to land a contract with Digital Playground. She went on to appear in dozens of adult films and pictorials.

In July of 2012, Jones announced that she was retiring from the adult industry but in February of 2013 she ended that retirement. During her career, Jones won several adult awards including three AVNs. She was also nominated for an XBIZ award and an XRCO award for best new starlet. As of this writing, she has appeared in 55 adult films.

Personal Life: In 2004 BiBi married businessman Jim Grdina. Together they have five children. Jim, was previously married to a Playboy Playmate of the Year, once appeared on an episode of the Bravo reality show "Millionaire Matchmaker".

In 2009 Jim sued his brother Jay Grdina and his wife at the time who happened to be adult star Jenna Jameson. The lawsuit stemmed from Jay and Jenna's 2003 attempt to buy Penthouse Magazine. Jim reportedly initially loaned Jay and Jenna $250,000 to buy Penthouse. When the deal fell through he was only paid back $125,000. Jim then reportedly loaned his brother $275,000 in 2006 which was not paid back. Jim also alleged that he was a partner in Jenna's website ClubJenna and did not receive his share of the proceeds when the business was sold to Playboy for an undisclosed amount.