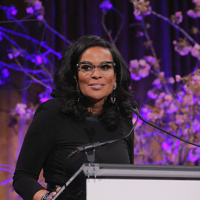 Beverly Bond net worth: Beverly Bond is an American model, DJ, businesswoman, producer, and writer who has a net worth of $3 million. Beverly Bond was born in New York City, New York in December 1970. She is the founder of the organization Black Girls Rock!. She signed with Elite New Faces and was booked for many athletic brand modeling jobs due to her height of 5'9″. She signed with Wilhelmina Models and appeared in commercials and campaigns for brands including Guess, Diesel Jeans, Nordstroms, and Nike. Beverly Bond became a DJ in 1999 after buying a set of turntables and worked in clubs in New York City. She DJed for celebrities including Prince, Sean "Puffy" Combs, Jay-Z, Sarah Jessica Parker, Hugo Boss, and more. She has also performed at the VH1 Fashion Awards, The Glamour Fashion Awards, ESPN's X-Games Awards, and more. Bond was honored in 2012 at the ASCAP 4th Annual Women Behind the Music gathering.