Bella Hadid Net Worth: Bella Hadid is an American fashion model who has a net worth of $25 million. Today, Bella and her sister Gigi Hadad are two of the most sought-after and highly-paid models on the planet. In 2017, Bella earned $6.5 million. In 2018, Bella earned $8.5 million. That was enough to make her the 8th highest-paid models on the planet. In the same year, Gigi was the #7 highest-earning model, thanks to her $9.5 million income. Both sisters earned around $10 million in 2019.

Early Life: Born in Washington D.C. on October 9, 1996, Isabella Khair Hadid was raised in Santa Barbara, California. Her mother is former model and Read Housewives of Beverly Hills star Yolanda Hadid, and her father is Palestinian real estate developer Mohamed Hadid. Her older sister, Gigi, and younger brother, Anwar, are also models. Like her sister Gigi, Hadid is also naturally blonde, but she has said she chose to dye her hair brown in order to set herself apart. Her parents divorced when she was seven years old. According to court documents, Mohamed paid Yolanda a settlement that included a $6 million house in Malibu, a mansion in Santa Barbara, several cars including an Escalade and Range Rover, $30,000 in monthly child support and a $3.6 million cash payout. Yolanda went on to marry prolific music producer David Foster in 2011, though they divorced in 2017.

Hadid was an avid equestrian, first competing when she was only 3 years old, and had dreams of competing in the Olympics. However, due to her chronic Lyme disease, she had to give up competing. After graduating from high school in 2014, Hadid moved to New York City to study photography at the Parsons School of Design, although she has since dropped out to focus on her modeling career.

Early Career: Hadid's first modeling job was for a Flynn Skye commercial project when she was 16 years old. Other early projects of hers include Hanna Hayes' Fall/Winter 2013 collection, and campaign work for Chrome Hearts during 2013 and 2014. Hadid is close friends with Jesse Jo Stark, the daughter of Chrome Hearts creators Richard and Laurie Lynn Stark.

Her breakthrough came in August 2014, when she signed with IMG Models. That fall, she made her New York Fashion Week debut walking for Desigual. In December 2014, Hadid made her first cover appearance on Jalouse Magazine. She also featured on Day 27 of Love Magazine's Love Advent Calendar that year.

Continued Success: Hadid's career continued to grow in 2015, when she walked for Tom Ford in Los Angeles for spring fashion week. In fall 2015, she walked at New York Fashion Week shows for Diane von Fürstenberg, Tommy Hilfiger, Jeremy Scott and March Jacobs; at London Fashion Week for Topshop; at Milan Fashion Week for Philipp Plein, Moschino, Missoni and Bottega Veneta; and at Paris Fashion Week for Balmain. In December 2015 she made her Chanel debut walking for the label in Rome.

Hadid has graced the cover of magazines such as Seventeen, Unconditional Magazine, Grey Magazine, Teen Vogue, and Evening Standard, among others. She has also starred in numerous editorials for publications such as Vogue (Australia, Japan, China, Turkey, France, Italy), Elle, GQ, Harper's Bazaar, and Glamour, to name just a few. In 2017 she broke the record for most Vogue September covers in one year, formerly held by models Doutzen Kroes and Linda Evangelista, when she appeared on the cover of five international Vogue editions: China, Spain, Brazil, Australia, and Arabia.

Notable campaigns Hadid has starred in include Marc Jacobs' "My American" campaign, TopShop's Summer 2016 Denim campaign, a 2016 campaign for Nike's OG Cortez sneaker, and in Samsung's 2015 Fall/Winter Look Book, which combined technology with fashion Other brands she's worked with include Victoria's Secret PINK, Ralph Lauren Denim & Supply, Missha, Givenchy, and J.W. Anderson. In May 2016 Hadid was announced as the new ambassador for Dior Beauty. She starred in a web series for the brand called "Dior Makeup Live with Bella Hadid", where she did a makeup tutorial using the label's products. Other brands she is ambassador for include Nike, Bulgari's accessory lines, and TAG Heuer. 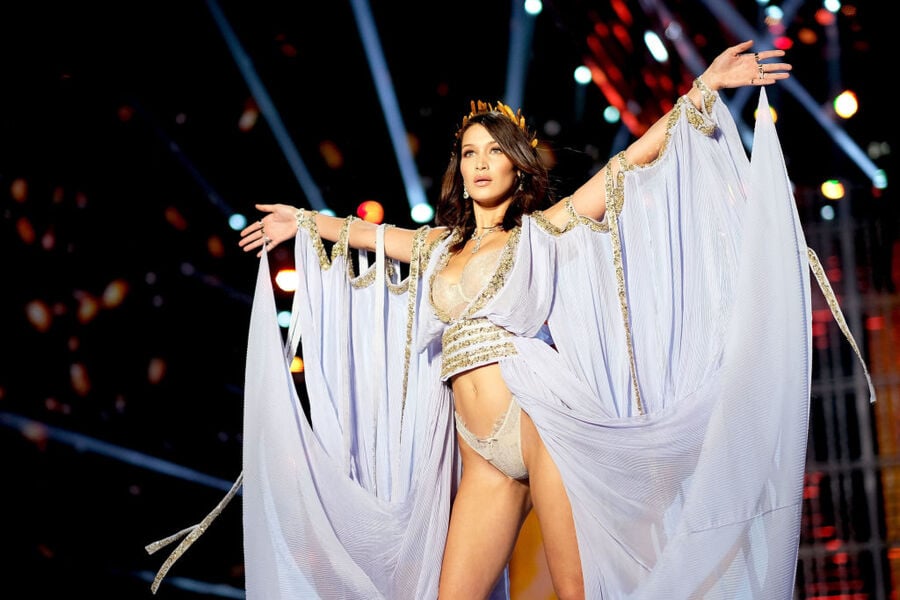 She has shot numerous campaigns with her siblings. With sister Gigi, Hadid starred in the Spring/Summer campaigns for both Fendi and Moschino in 2017. That same year she worked with brother Anwar on a campaign for Zadig & Voltaire. She also starred in Topshop's 2015 holiday campaign alongside Gigi, and walked in Gigi's "TommyxGigi" Tommy Hilfiger collaboration show in Lose Angeles in 2017.

In addition to her modeling career, Hadid has also pursued other ventures, such as appearing in the 2016 short film "Private" by Tyer Ford. She has expressed further interest in acting. Hadid has also tried her hand at designing, releasing three collaborations with brand Chrome Hearts. Their third collaboration, "Hellz Bellz" sunglasses, officially became available in December 2019.

Personal Life: In July 2014, Hadid was arrested and charged with a DUI. She had her driver's license suspended for one year, with six months of probation. Additionally, she had to complete 25 hours of community service, as well as attend 20 hours of Alcoholics Anonymous meetings.

Hadid began dating Canadian singer The Weeknd at the beginning of 2015 in a high-profile public relationship. She appeared in his December 2015 music video for the song "In the Night". They first broke up in November 2016, reconciling in 2018 before splitting for a second time in 2019.

Along with her mother and younger brother Anwar, Hadid has been open about her chronic Lyme disease diagnosis. Her mother Yolanda also suffers from the disease.

Hadid is a fan of sneakers, and was featured in a video for Complex as part of their "sneak shopping" series. Her interview was infamously awkward, and achieved viral status on the internet as her responses to what kind of sneaker she liked and disliked became widely circulated and joked about. She owns a Bentley vehicle with a market value of more than $180,000.

Real Estate: In November 2019, Bella paid $6.1 million for a penthouse condo in the Soho neighborhood of New York City. Bella sold this property in March 2021 for $6.5 million.

Her sister Gigi owns two condos a few blocks away which were purchased for a combined $10 million. Gigi is planning to combine the two units into one massive unit. 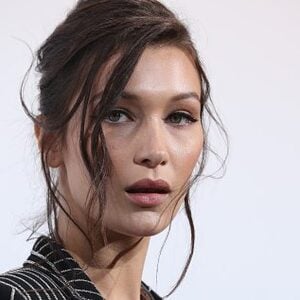